Most people I talked to this week were surprised we were away for the week-end because it was so rainy and cold everywhere. Well, we lucked out and had a dry week-end. It was cool and very windy down at the beach but back at the campsites and along the trails it was quite nice for the end of October.
It was a wonderful drive up and after setting up we headed out in search of wood so we could have a roaring campfire that evening. We came across a log cabin on the south side of the park. We had to check it out as it was for sale. If we had a spare $600,000.00 it could be ours but we both agreed we enjoy the ability to visit different parks each week-end in our mobile cottage. We were able to get some wood and on our way back to the park we came across about 20 wild turkeys crossing in front of a home so I quickly ordered my chauffeur to turn around so I could take a few photos. Duncan had not noticed them when we passed by. He quickly turned around and I was able to get a few photos of them as they headed towards the back of the house.  We took a short tour through the park to see if we could see some deer. Duncan spotted three of them not to far into the woods so we stopped to watch them. It was a mom and two younger ones. I tried to get a few photos but my camera was having trouble focusing through all of the trees with the low light as it was approaching sunset. As we watched we noticed there were 7 of them all together. It wasn't long and they all headed deeper into the woods so we went back to camp to have supper and spend the evening in front of the fire. 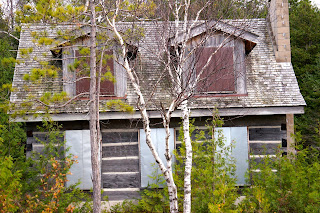 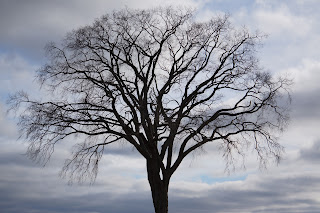 All the leaves are gone and winter is coming 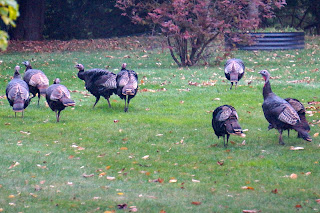 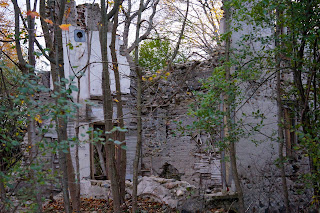 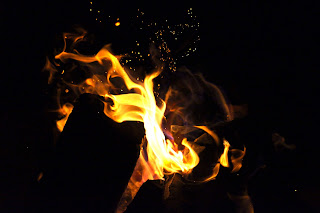 A warm and cozy campfire

Saturday was a mixture of sun and clouds and 8 C. After a yummy breakfast we headed out on the trails for a bike ride in search of wildlife and adventure. We started with the Tower Trail and were amazed that we saw no signs of any wildlife. We stopped at the tower for a while and then headed to the bird blind. After spending some time there we continued on and crossed paths with a snake. That was the extent of any wildlife we encountered. The next trail was The Deer Run Trail and we biked all of it including the extension which took us through a lot of the park. We stopped along the way and took a few photos. It was nice to be out enjoying the sun and scenery on our 12km ride. We spent the rest of the afternoon at our site enjoying the company of red squirrel and all of the birds that were coming to enjoy the peanuts. At one point there were 8 blue jays all trying to get there share of the nuts. What fun it was to watch red squirrel trying to keep them away so he could have them all. After a delicious spaghetti dinner we sat in front of the fire for the rest of the evening.
Out for a bike ride through the woods 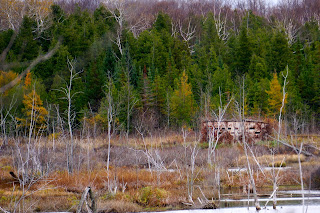 Looking across at marsh towards the bird blind from the tower 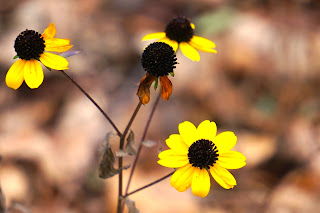 The Black Eyed Susan's are still in bloom. It was a nice surprise. 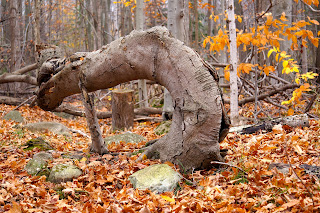 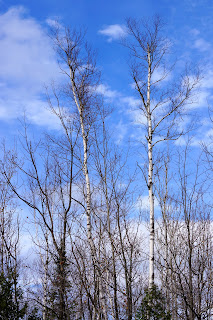 The bare birch trees with a blue sky backdrop 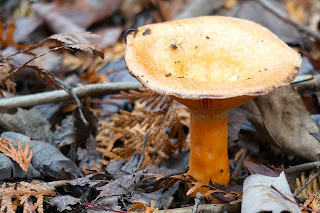 Saturday at the camp site 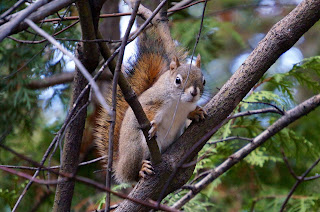 Watching me from the trees 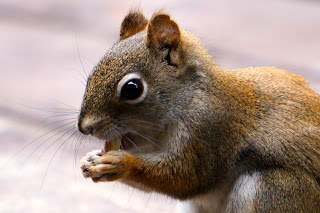 Yummy........Enjoying one of the peanuts 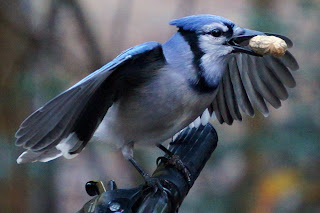 Collecting a nut from the bicycle handlebar 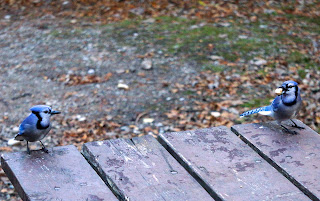 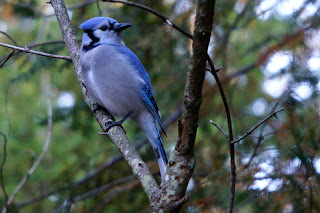 Nice pose for the photographer 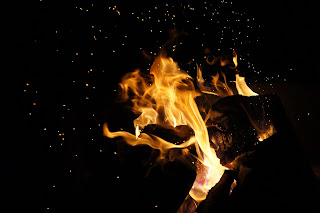 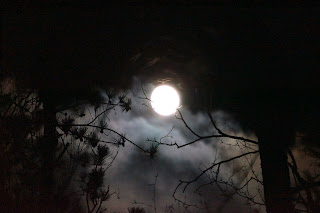 Sunday morning was crisp and cool but it didn't stop me from enjoying the birds that came to visit. Our first new visitor was the Downy Woodpecker followed by the Red Breasted Woodpecker and then the Red Breasted Nuthatches. I had quite the morning watching them all try to get in on a nice snack of peanuts. It was fun to watch the red squirrel try and protect what he thought to be his peanuts. He would run up into the trees and try to chase the birds away after they had got a nut of there own. While he was busy doing that another bird would fly in and get one of there own. He was getting a really good work-out.  At times he would come over closer to me and start chattering at me as if I had done something wrong. He sure did bring some humor to the morning. Duncan made us a wonderful late morning breakfast which I thoroughly enjoyed. Thanks!!! Before we left the park we went down to the beach but it was a short visit. It was to windy and cold to enjoy a walk along the beach.
We were pleasantly surprised that we had made it through a week-end at MacGregor Point with-out any incidents. That was a first and hopefully there will be many more of the same. 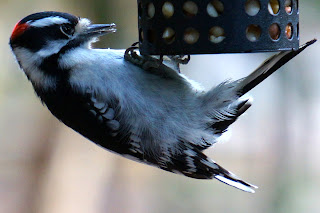 Downy Woodpecker at the peanut feeder 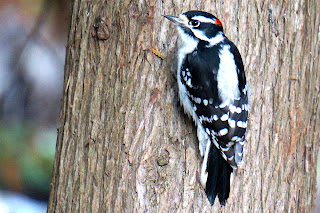 Checking for bugs in the cedar tree 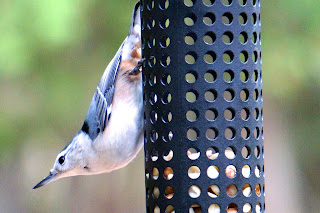 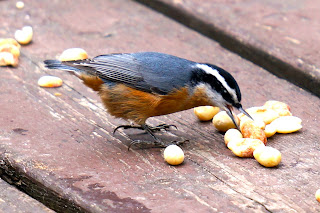 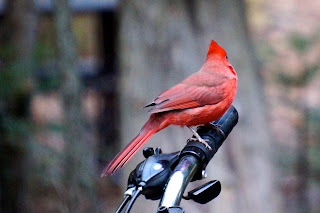 Mr Cardinal on the bike handle 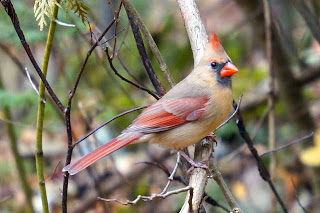 Mrs. Cardinal waiting for her opportunity to get a nut 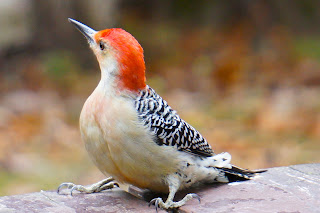 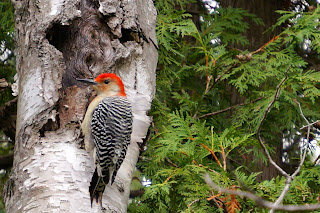 Checking for a snack in the birch tree 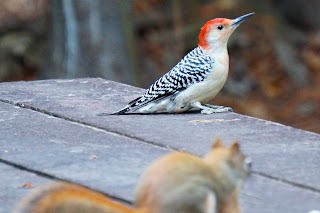 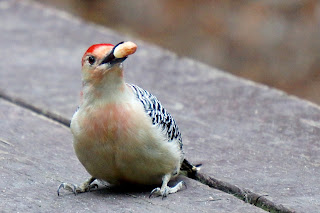 I got one!!!  I will be back and that squirrel won't keep me away 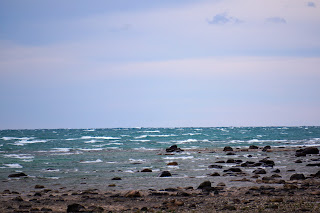 Looking out at the lake from the boardwalk