The Clancy's sure know how to have a good Mexican Fiesta!!!
This was our annual Clancy Reunion weekend and there were 47 of us in attendance over the course of the weekend.  The Mexican theme was a hit and the kids thoroughly enjoyed destroying two pinatas and scrambling for the goodies that dropped from them. We arrived early Friday afternoon and were able to get set up before cousin John arrived with his 5th wheel, and yes we left him lots of room to maneuver his toy hauler into place. By Friday evening there were a number of us present and the party began. Just after dinner we had a surprise guest show up. It was Hombre Jarvis and he had his seniora on his arm. We had such a laugh over this that it was the highlight of the day.....LOL  Saturday the guests kept arriving and the fun was escalating as time went on. There was more food than you could imagine and the Mexican dishes added to the fiesta. There were not to many beans so we could enjoy everyone's company without having to be at a distance (if you get what I mean). We had new members of the Clancy Clan family join us this year. Tom and Cecile, their two son's and wives as well as the 4 grandkids. We had just discovered a while ago that he is related to us through brothers that were our grandfather and great grandfather so we are 2nd cousins once removed. We also had the youngest member of the clan join the party for a few hours. Emma Bailey Matheson is 4 months old and is the cutest girl in the world if I do say so myself (I'm the grandma). There were games, pinatas, buggy rides, food and more food and lots of laughs shared and after dark we enjoyed  fireworks and time around the campfire. By Sunday the numbers were decreasing but the fun continued. We enjoyed a late breakfast together and those that had long drives ahead of them packed up for there journey home. We were thrilled when cousin Michael arrived from Ottawa before they had left as we had not visited with him for a while. Liz was most grateful to see him as she would now loose the title of "eldest cousin" at the reunion....lol  Michael spent a few hours with us before he had to meet up with his son Elliot. We hung out until later in the evening and enjoyed dinner but not before the skies opened up and we had torrential rains. Since it was not letting up we decided to leave the motor home out there and we went back on Monday morning to bring it home. We just wanted to go back for another visit.....lol
A great weekend was had by all and I must thank our gracious hosts, Liz and Fred for there amazing hospitality.
Looking forward to next years gathering and celebrating half of our heritage with an Irish theme.
We can hope that our numbers keep increasing and that we get to enjoy more of the family next year. You really don't know what fun you are missing out on.

We must thank Geoff for the fancy F on our banner 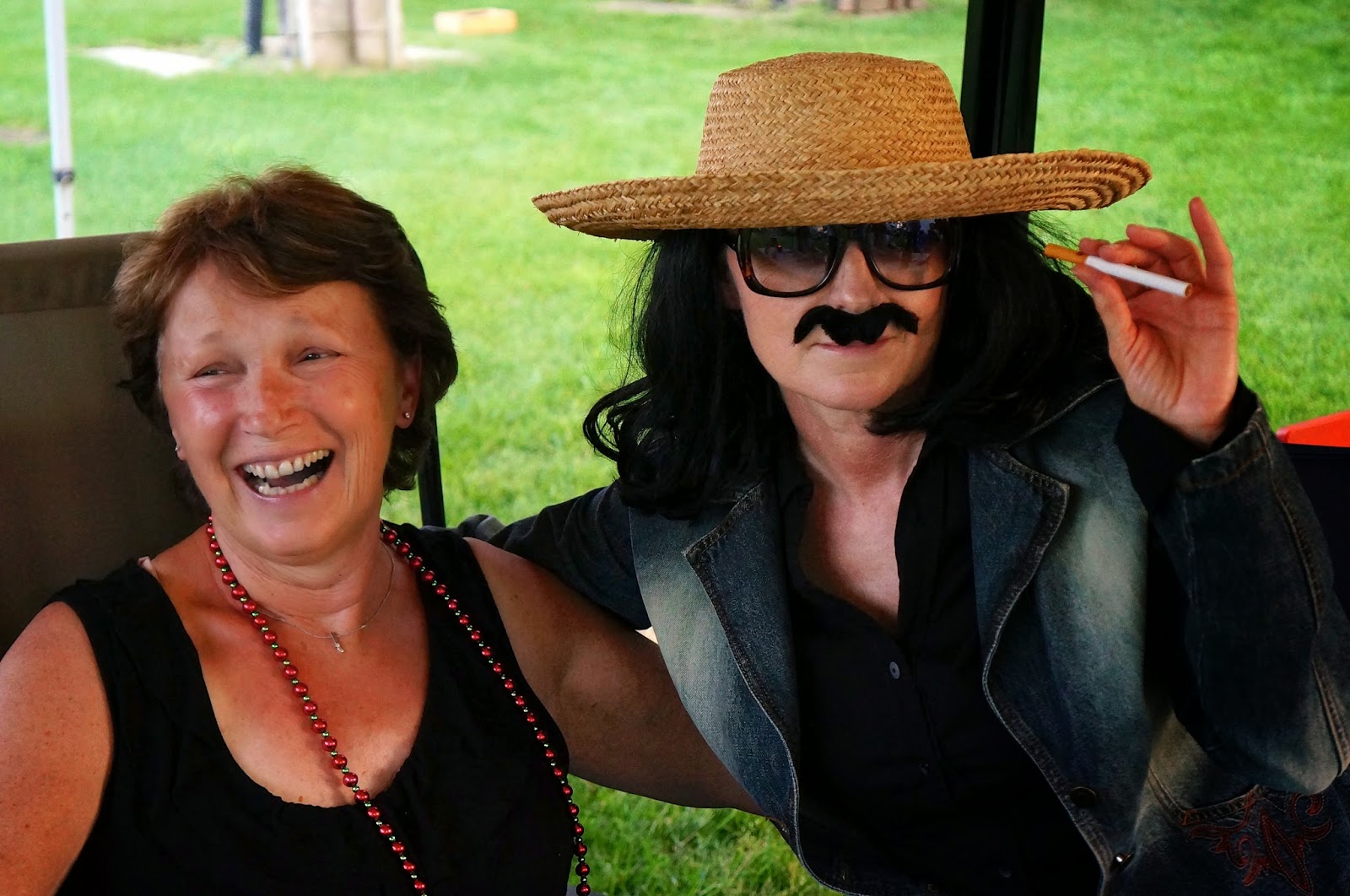 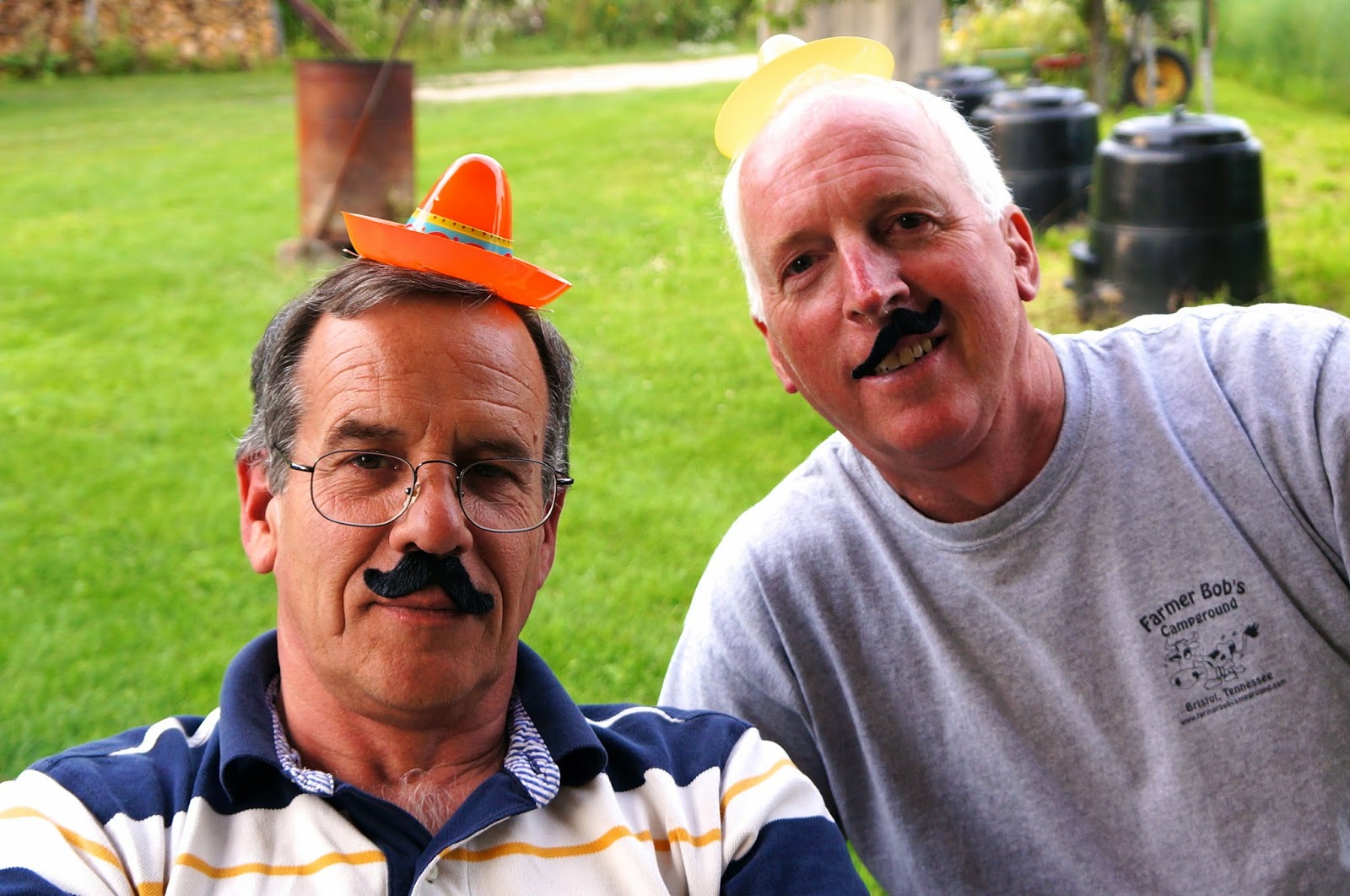 Moustaches were appearing all over the place 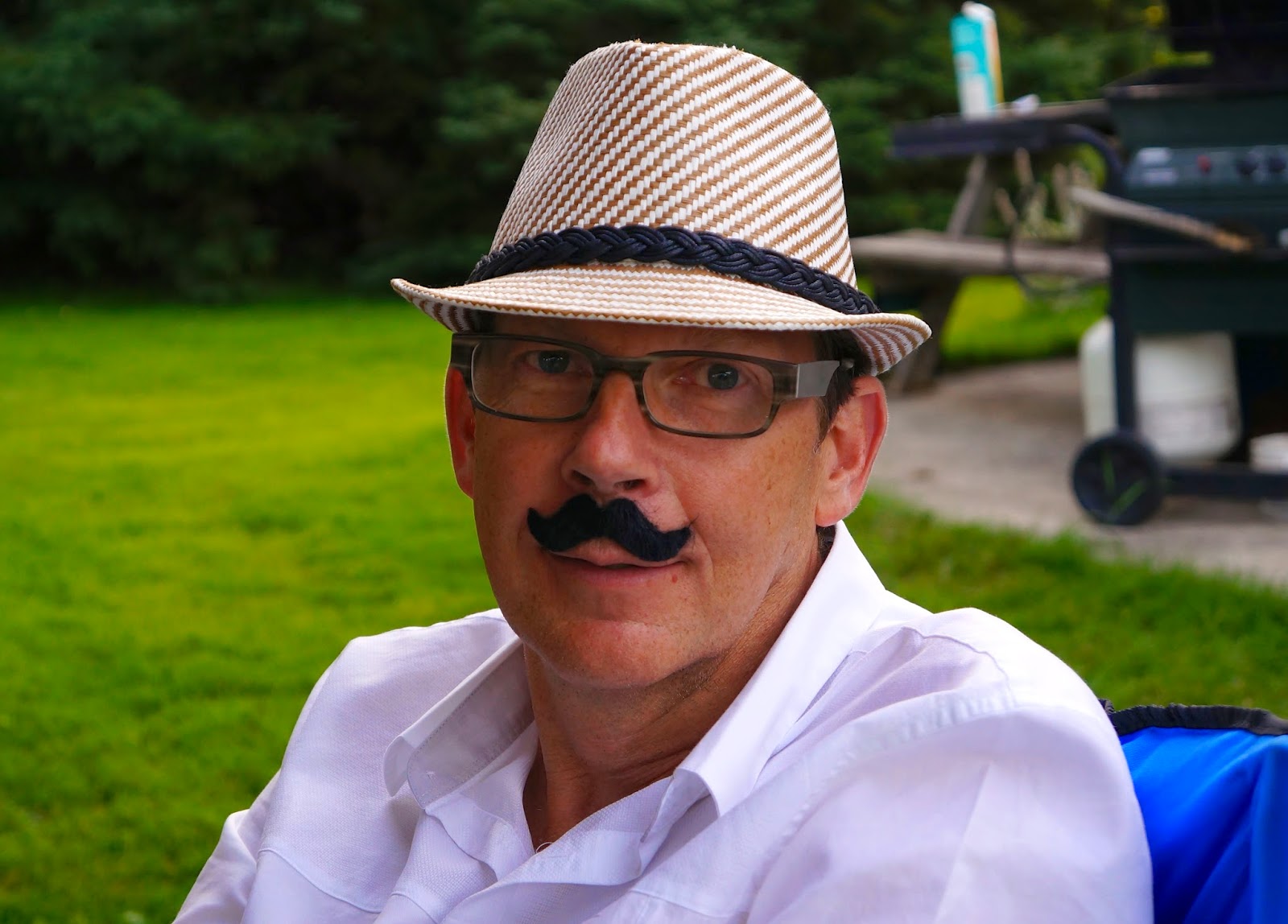 Clancy(Joe) looked great with his moustache and new hat 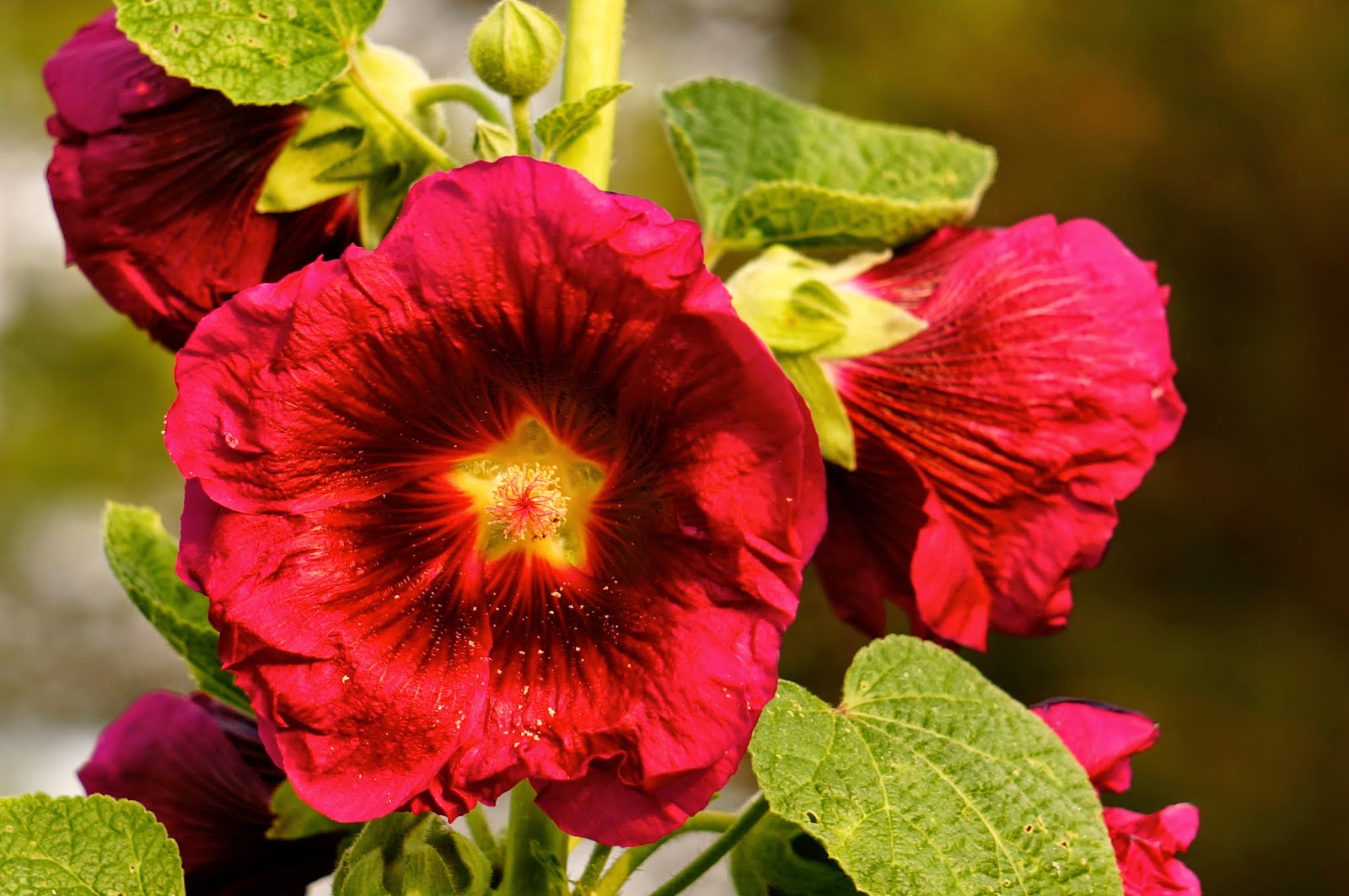 Liz had some wonderful holly hocks 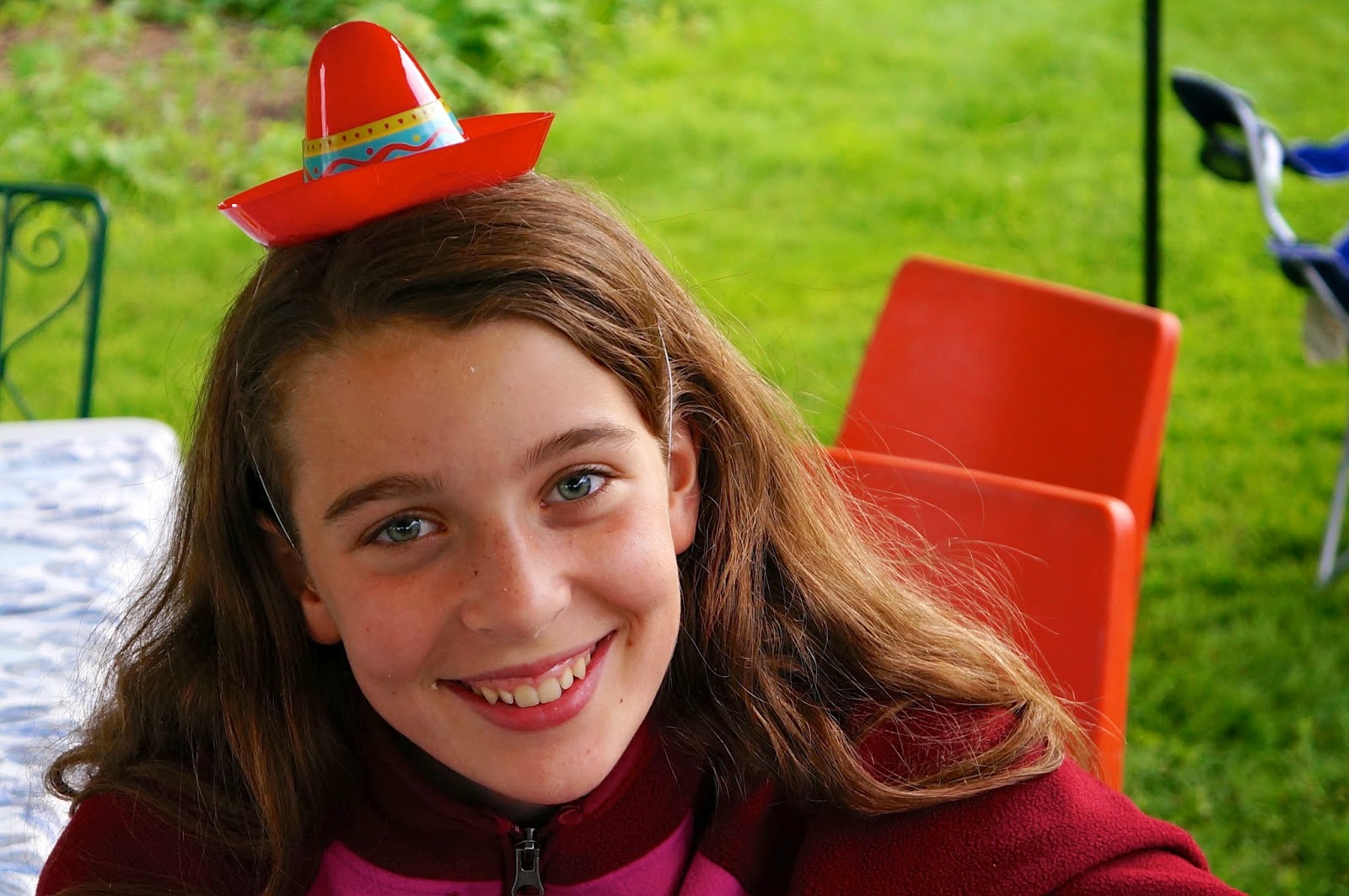 Sophie with her wee sombrero 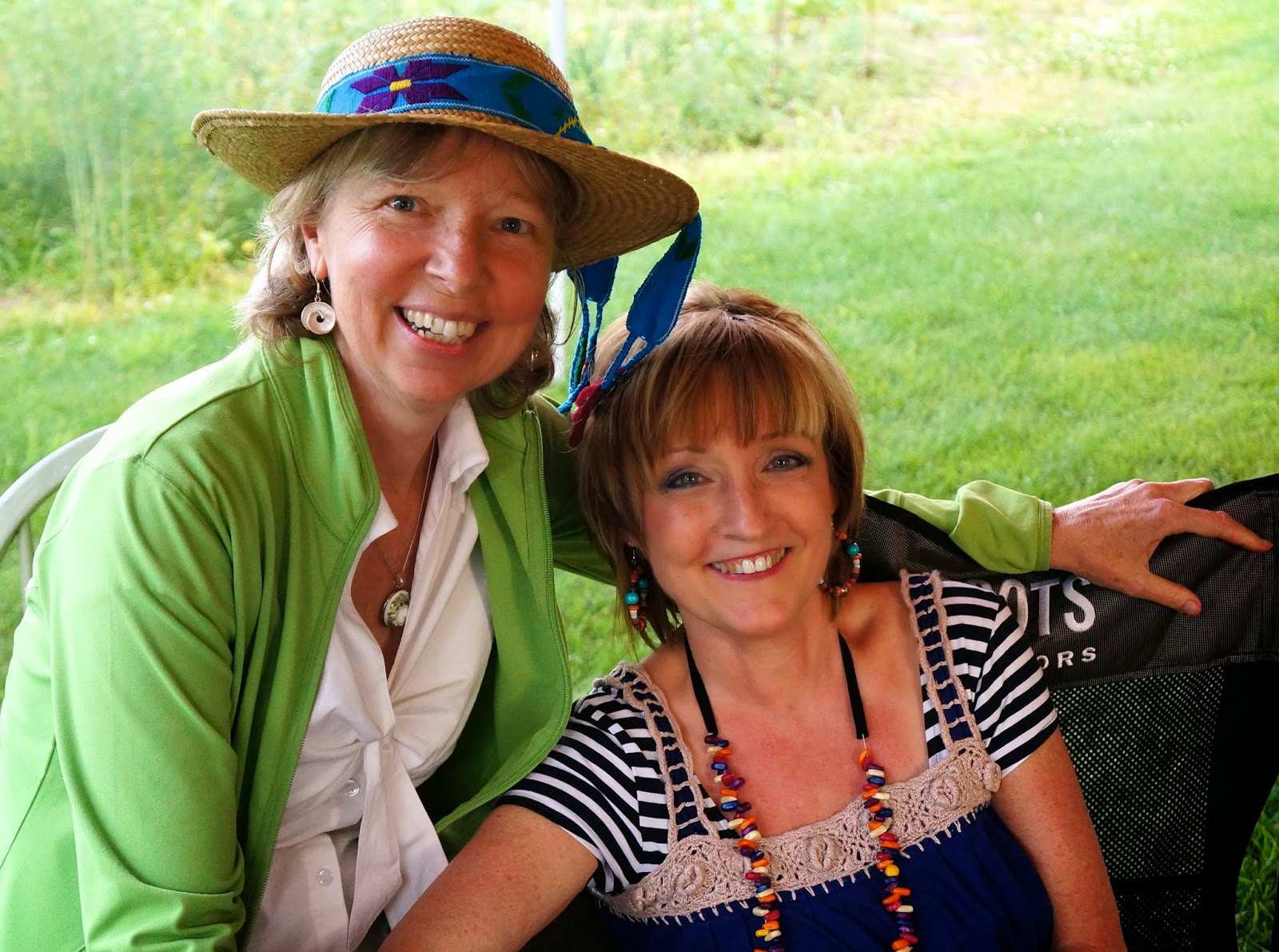 Janet and Diane enjoying time together 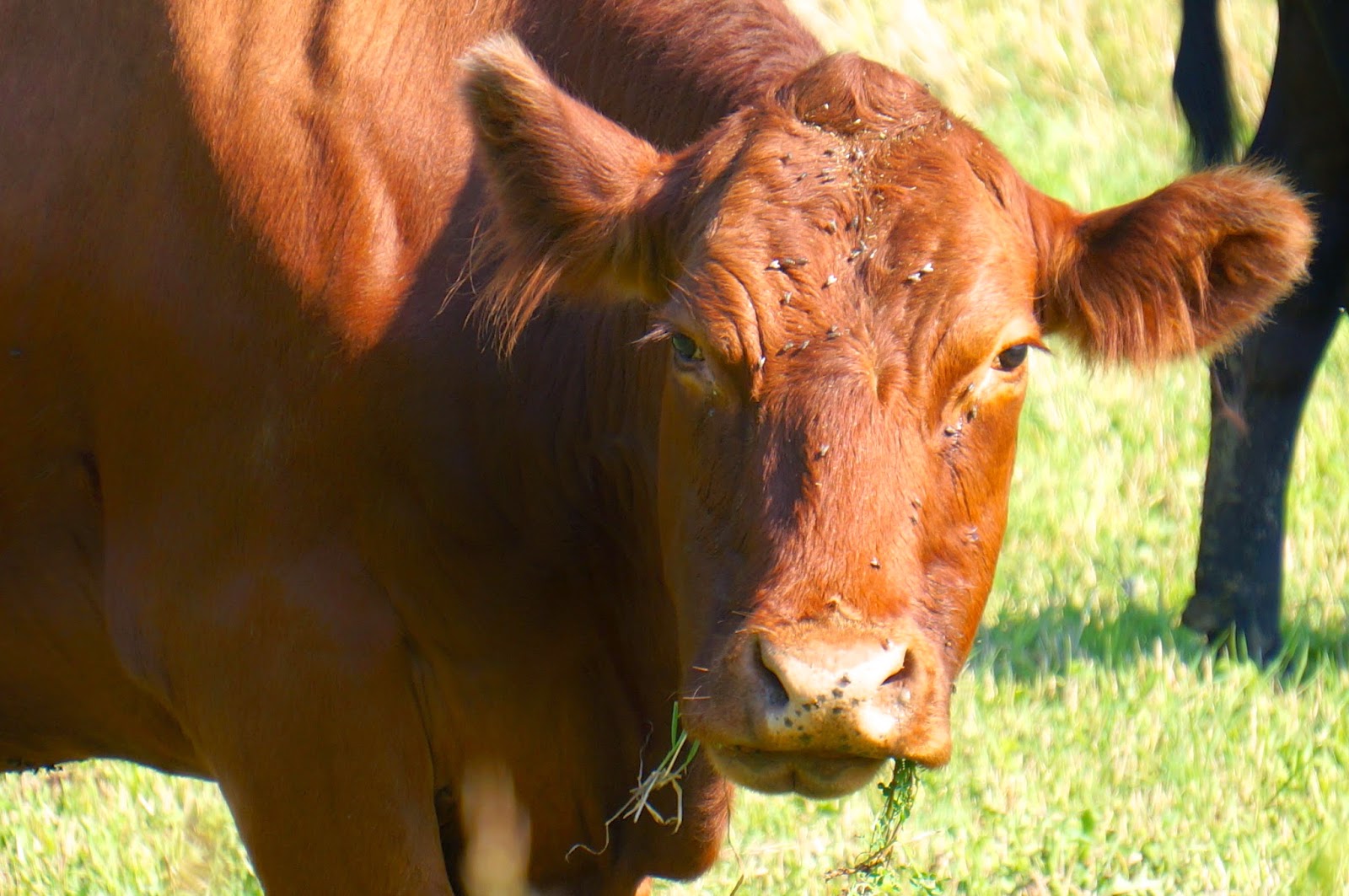 I enjoyed some time with the cows 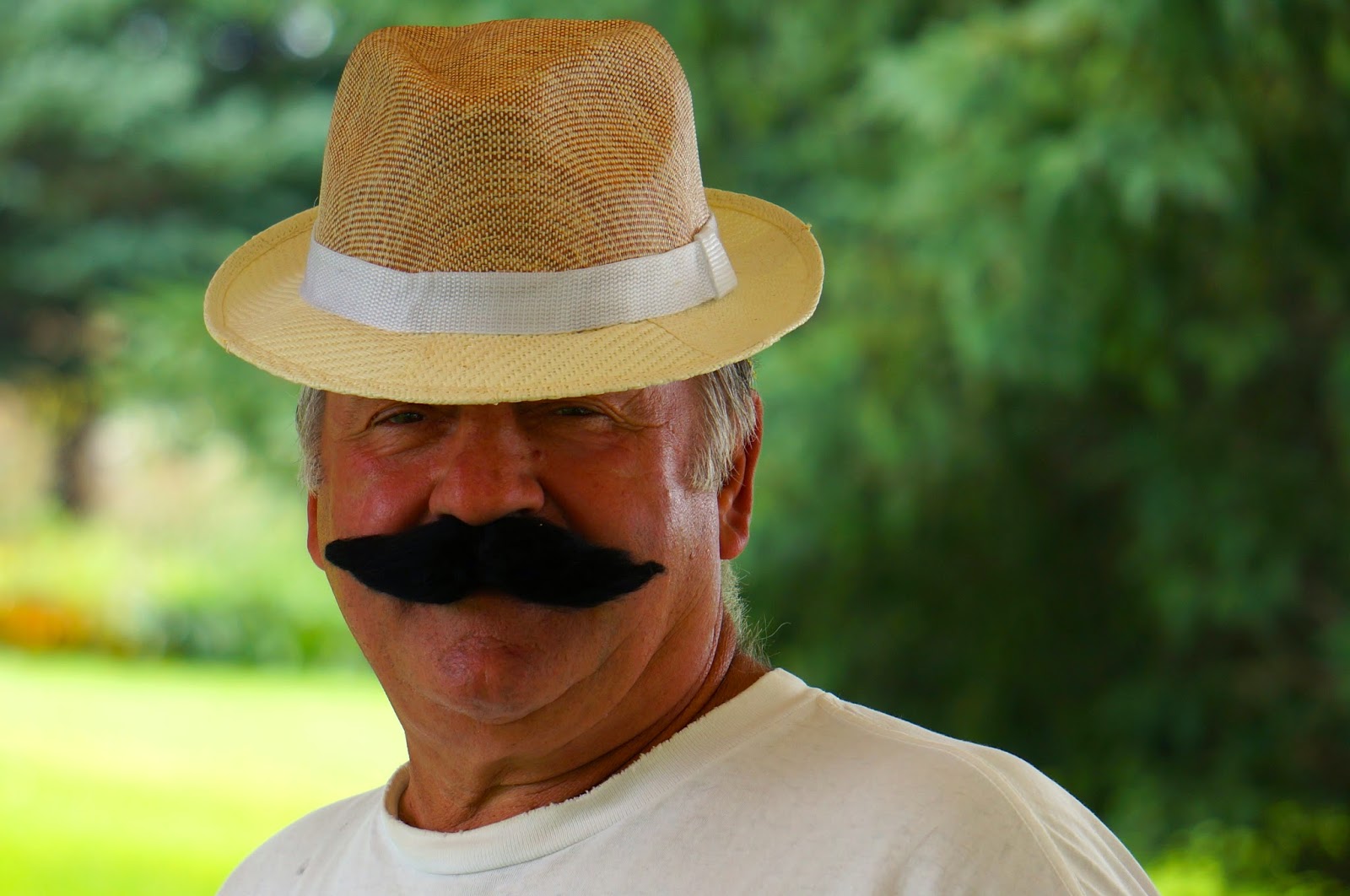 Our host Fred looked amazing in his Mexican attire 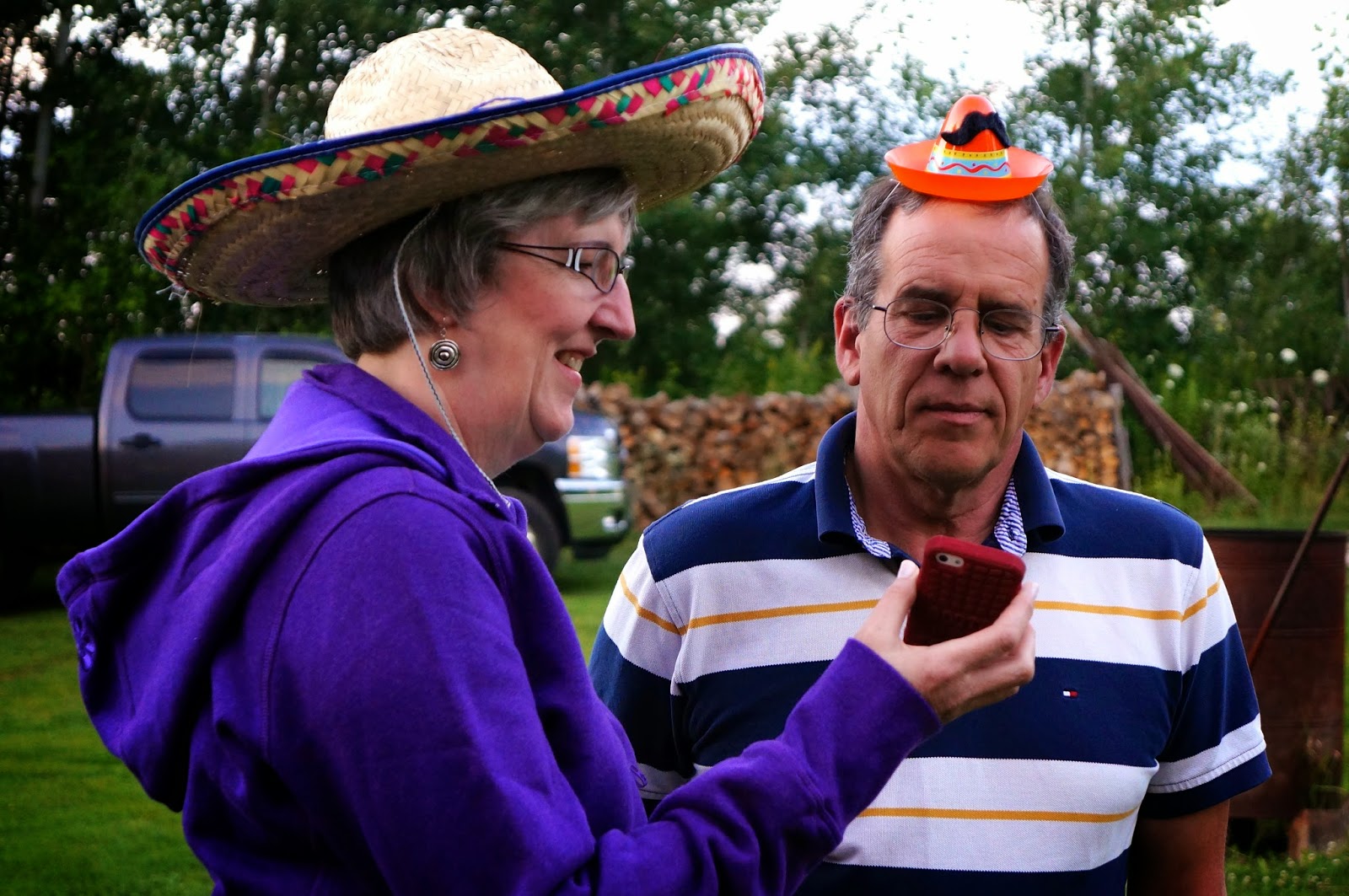 The newlyweds, Pat and Geoff in the fiesta wear 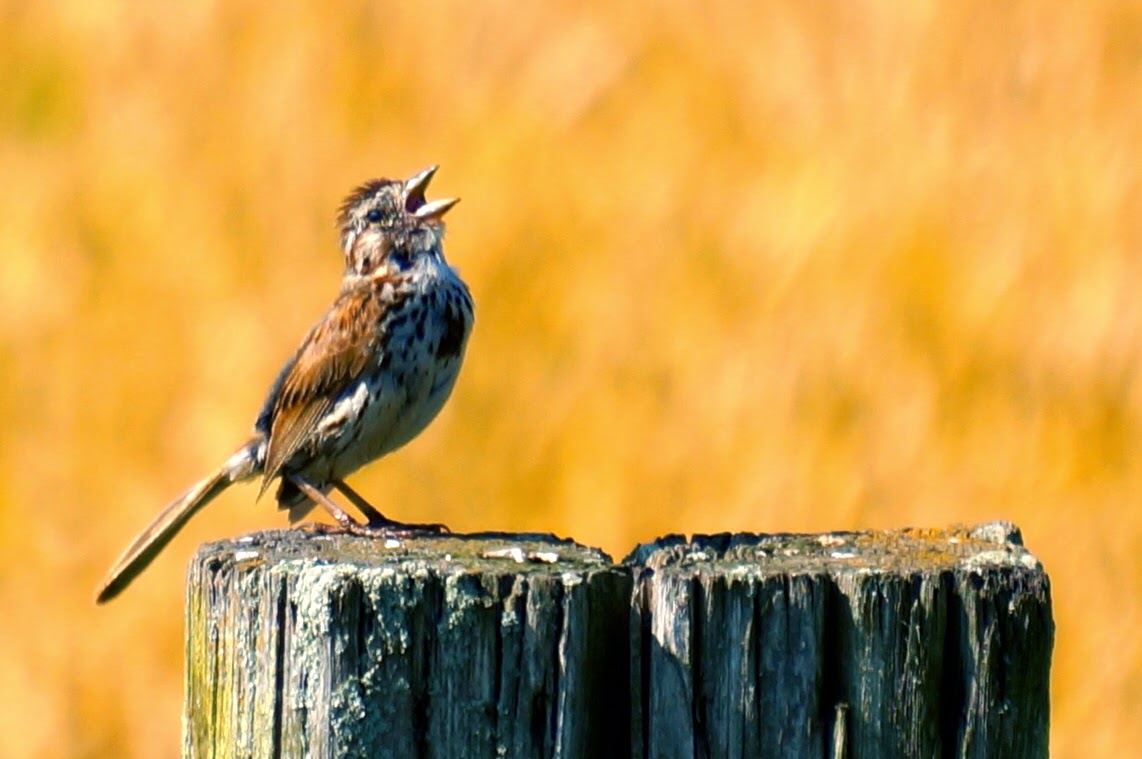 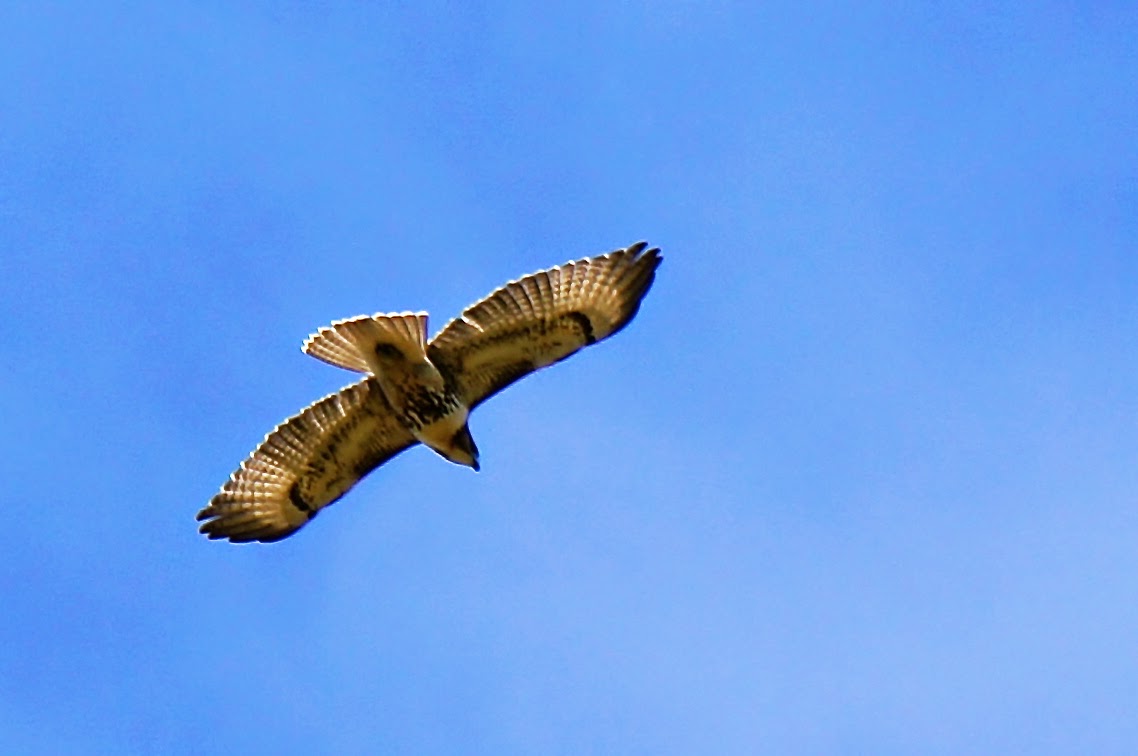 A hawk flying over our gathering 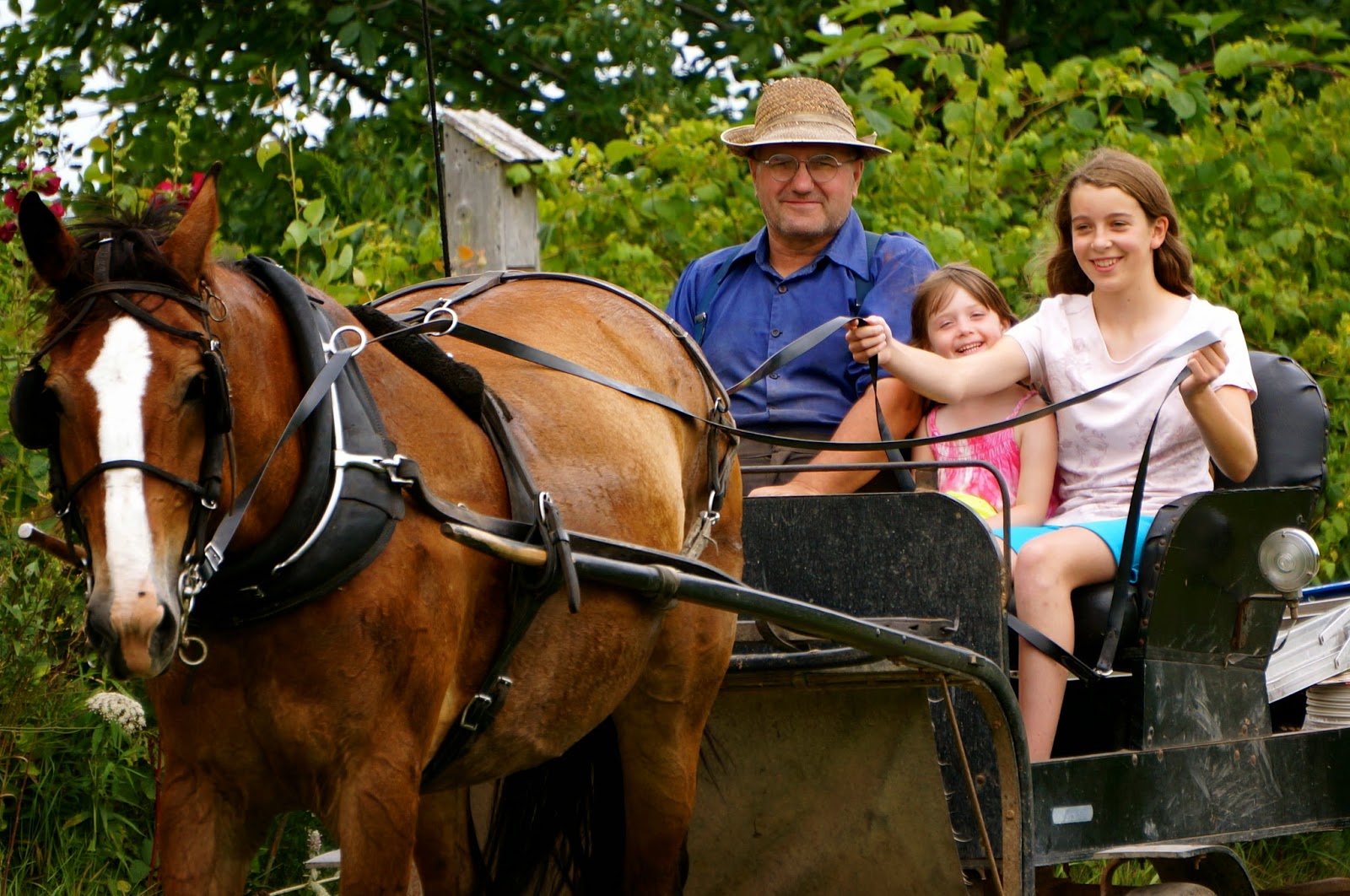 Aurora & Sophie with the reins out for a buggy ride 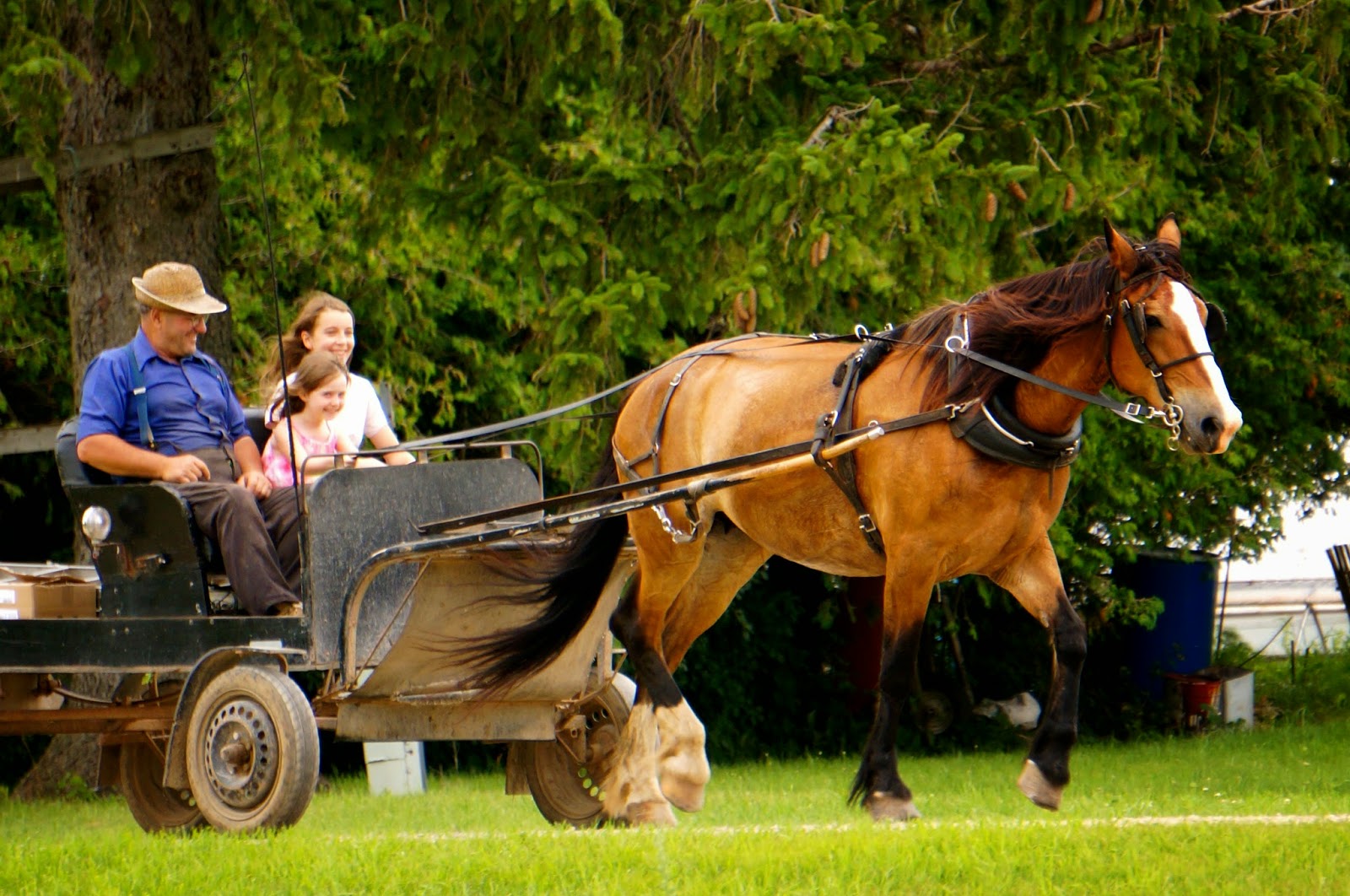 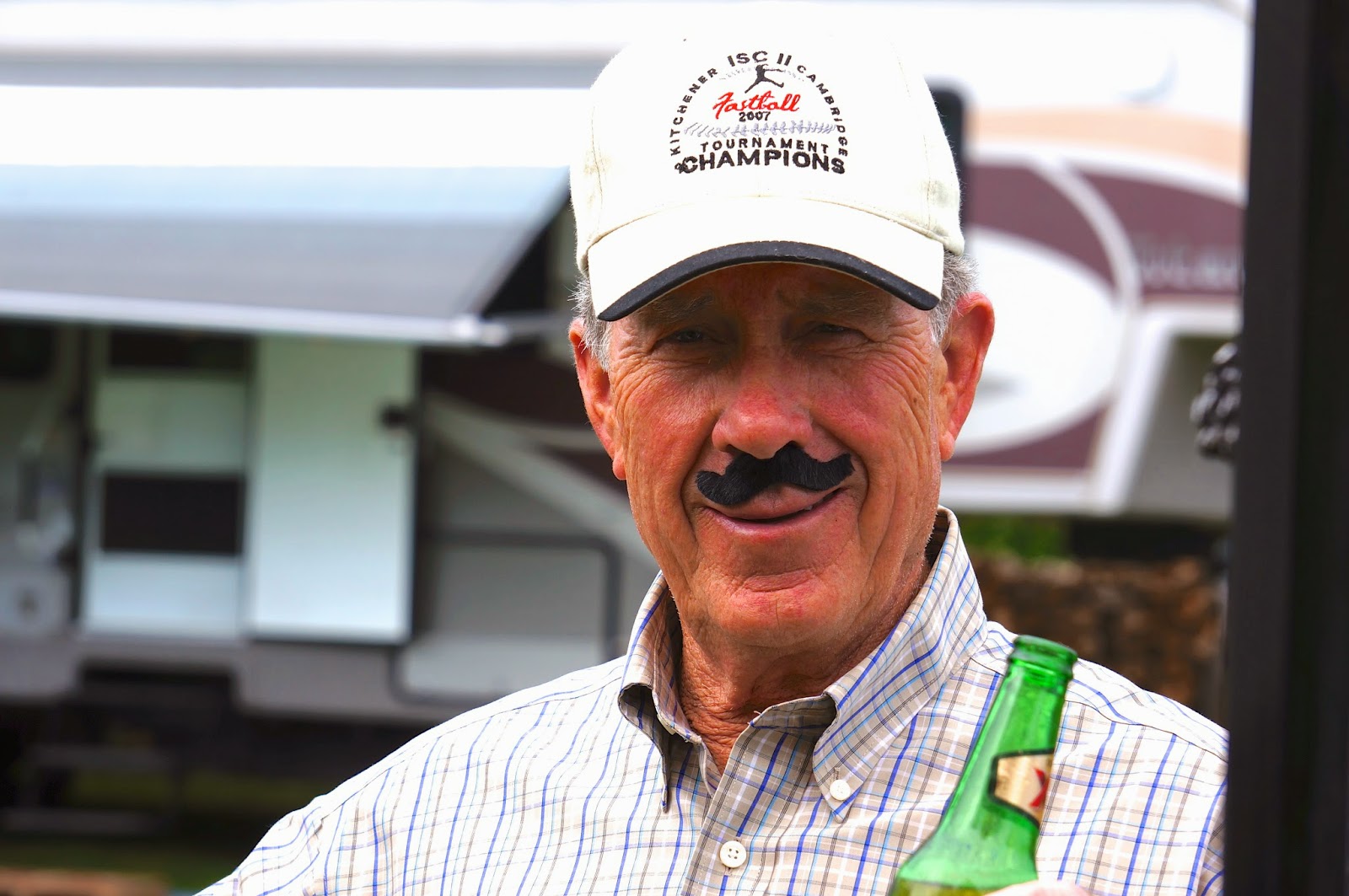 Tom, our found cousin. Was nice to have your family with us 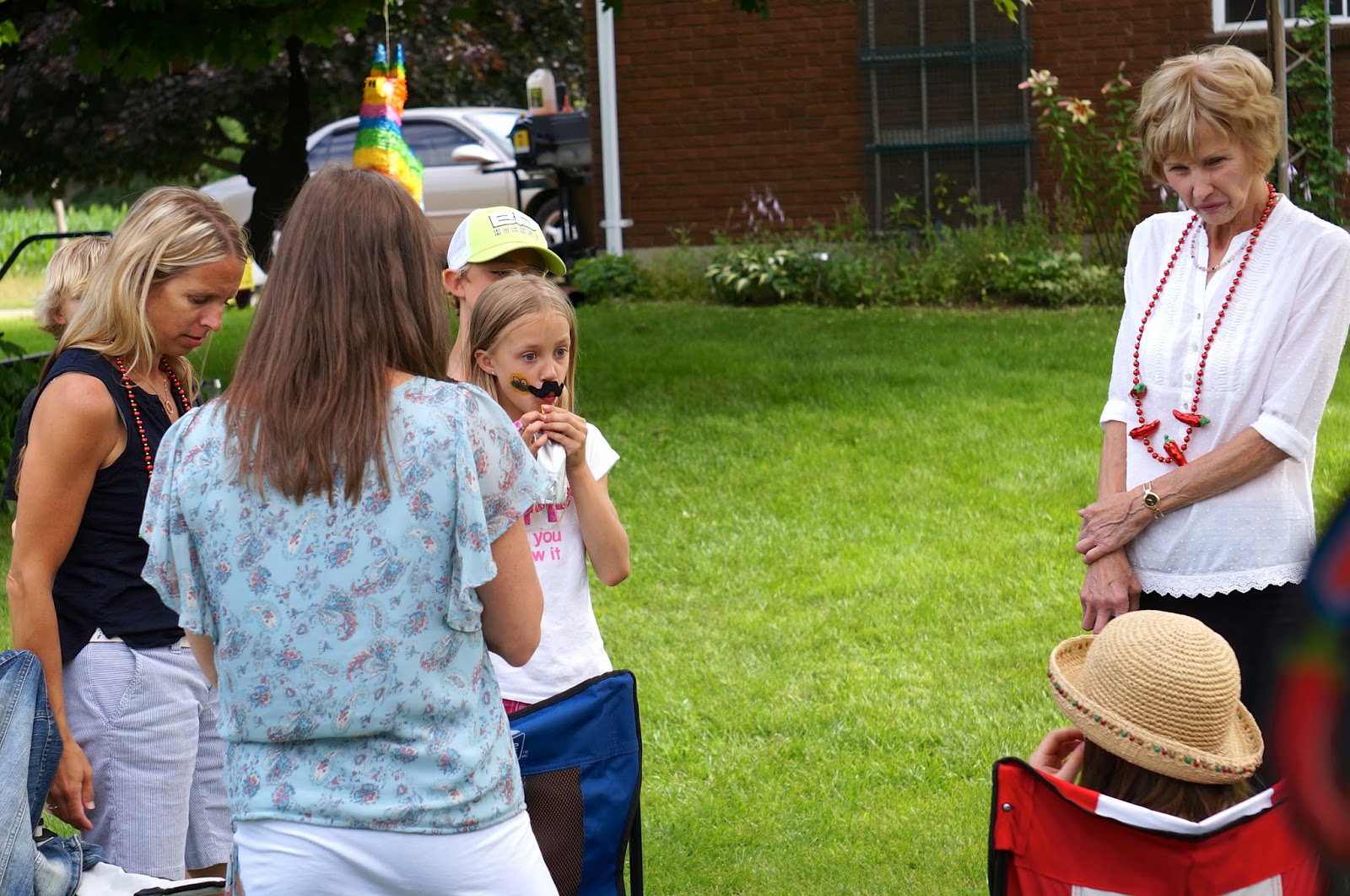 Some of Tom's family enjoying the fiesta 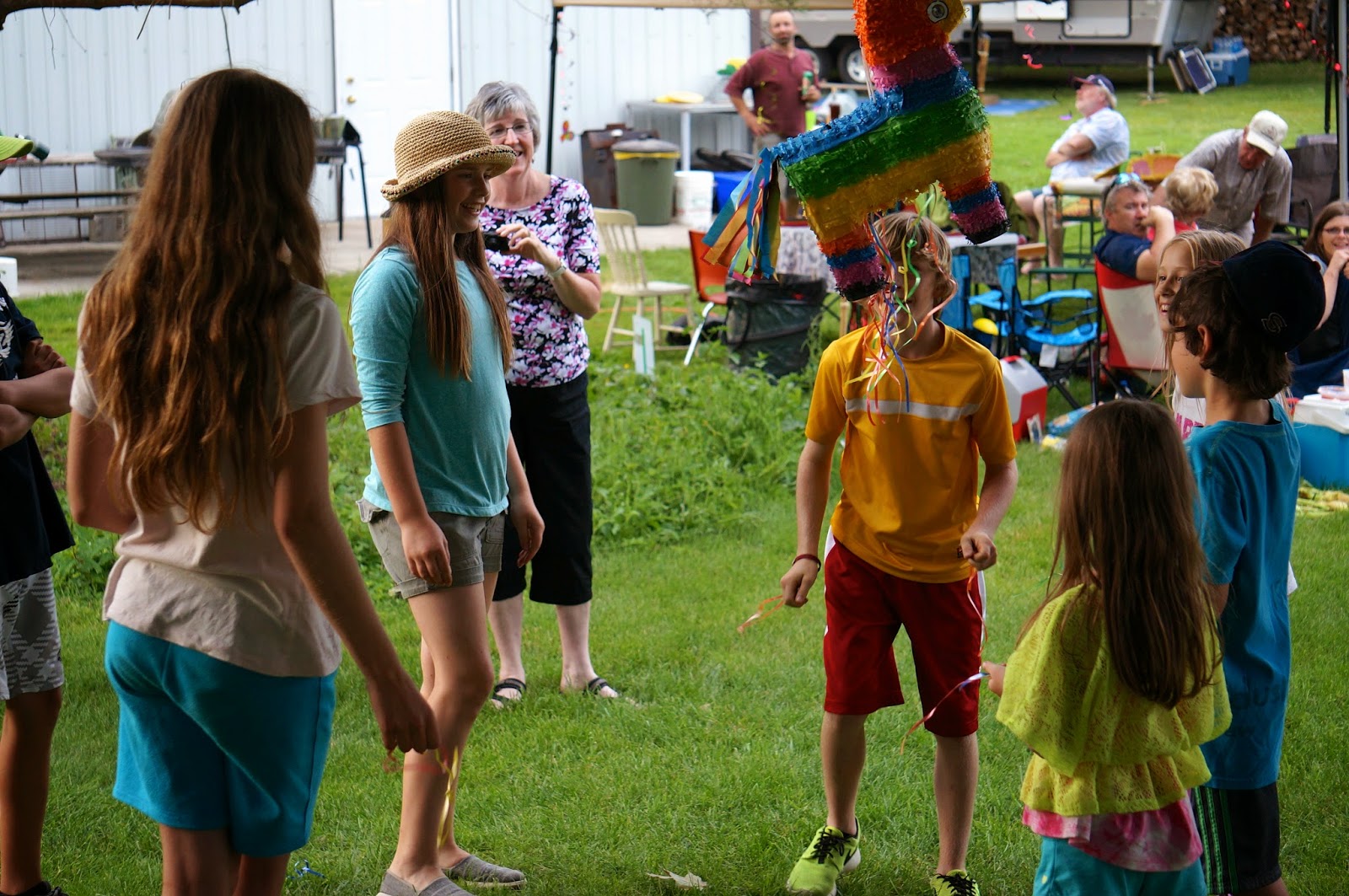 The kids pulling the strings on the first pinata 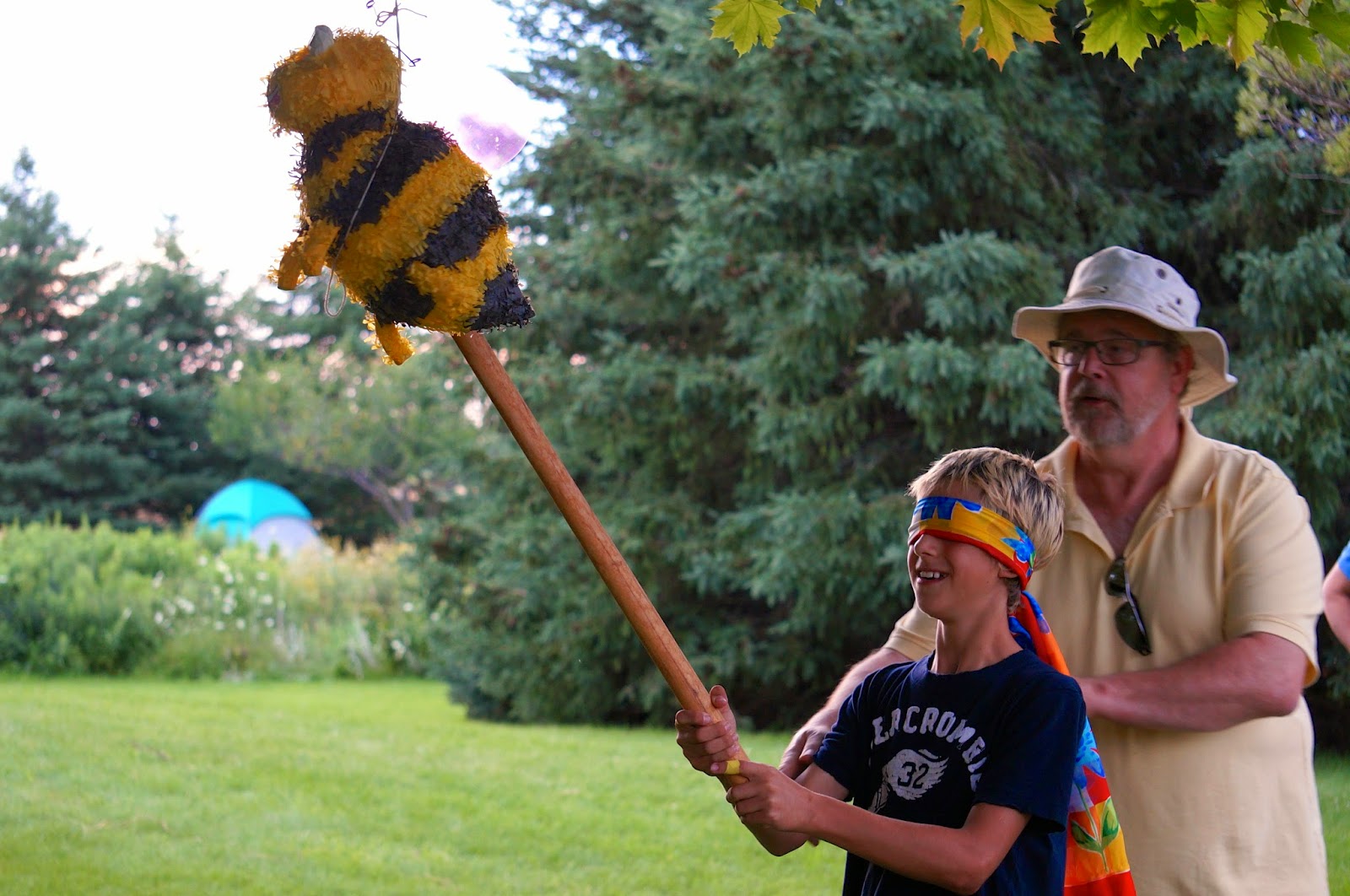 This one required a blindfold and stick 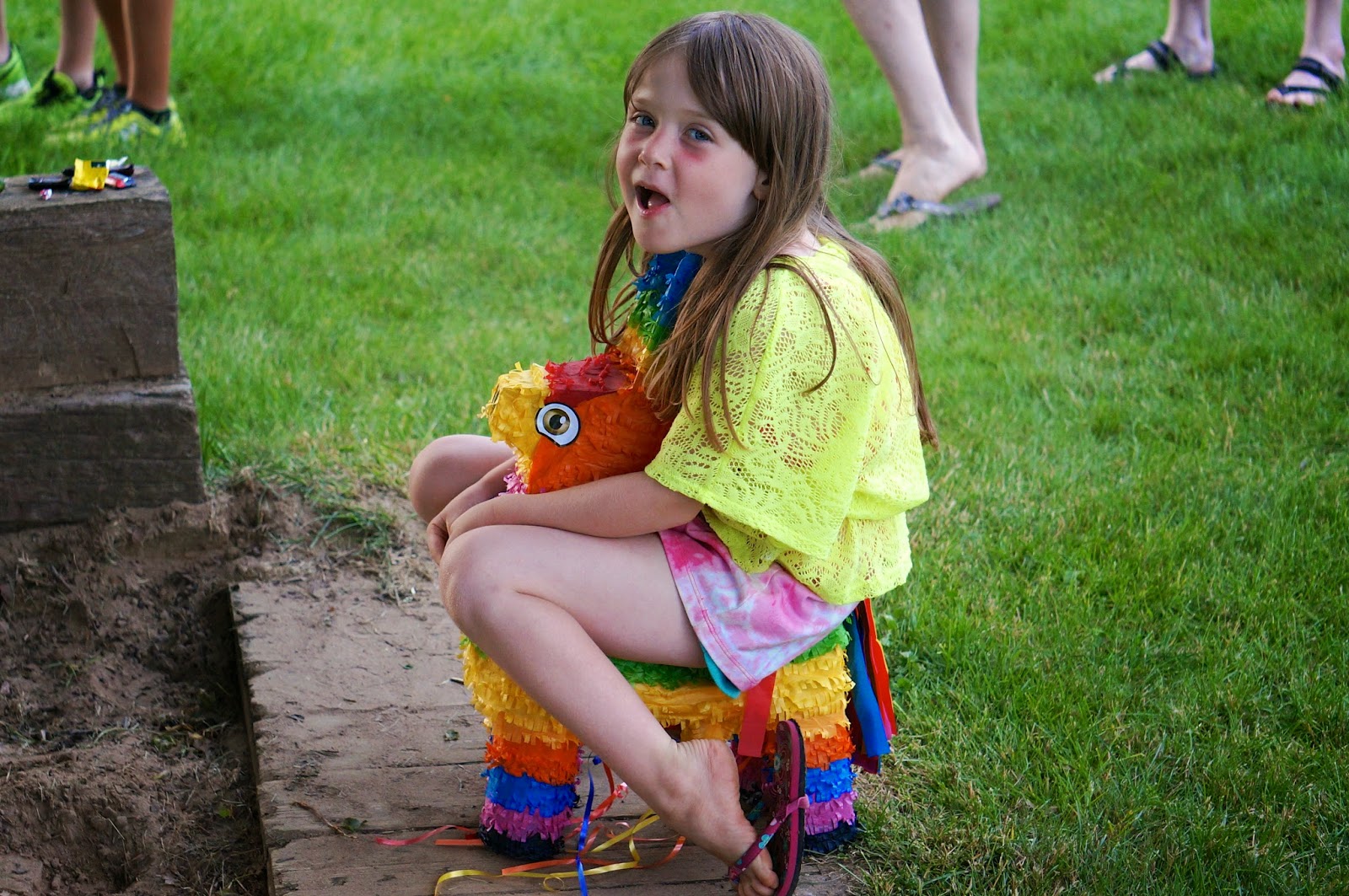 Aurora found a good use for the used pinata 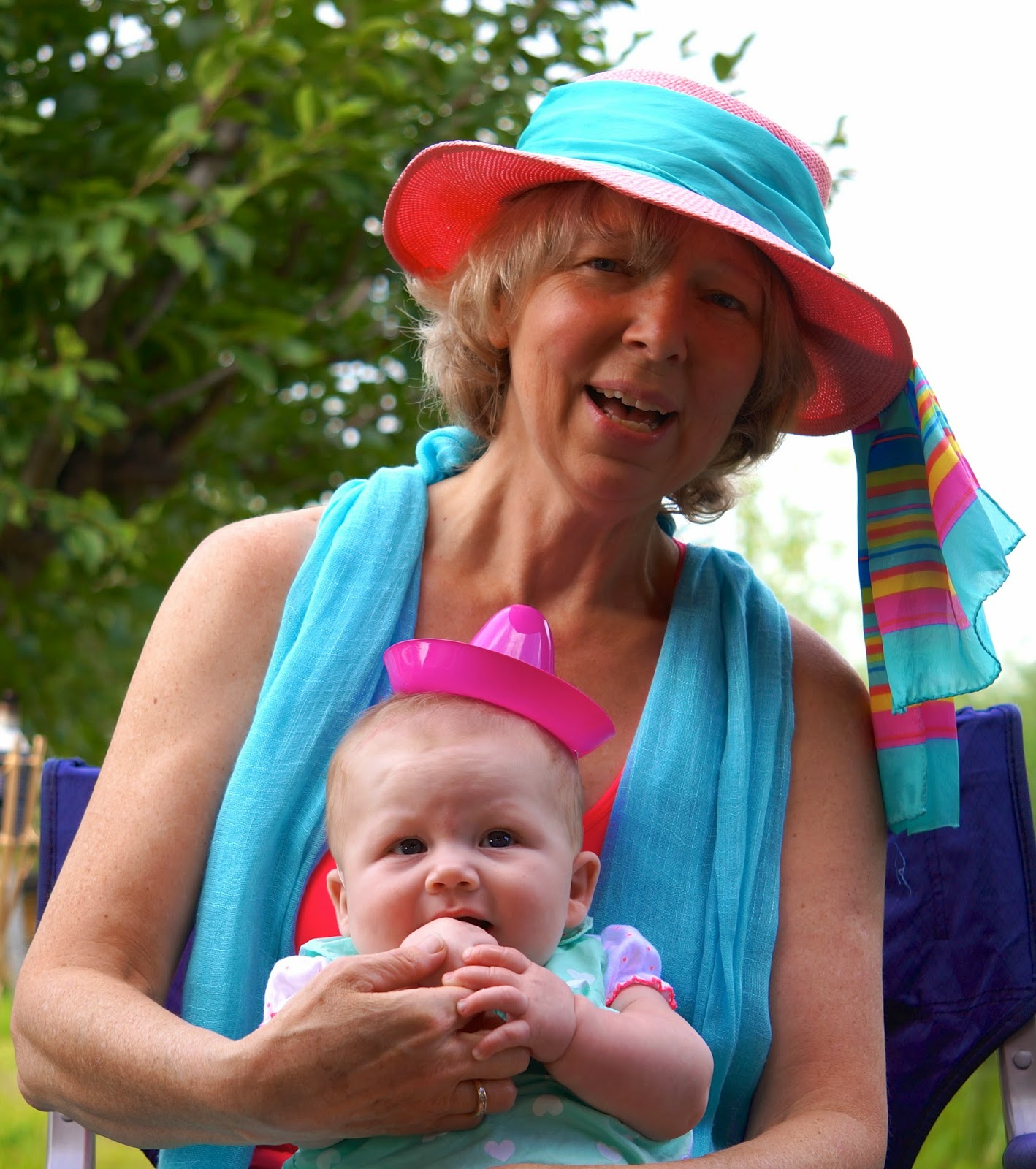 Grand Aunt Janet with Emma, the youngest of the clan 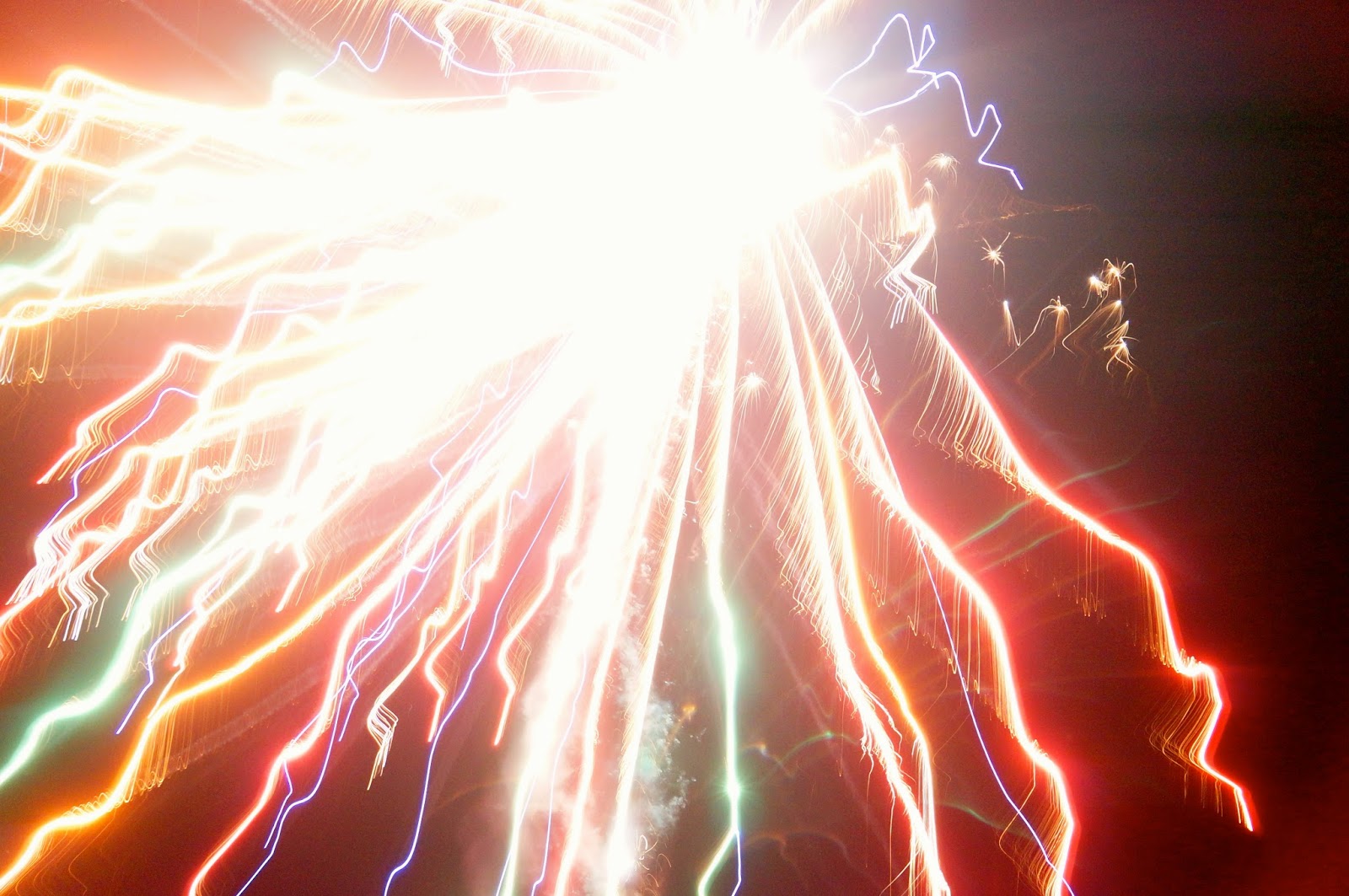 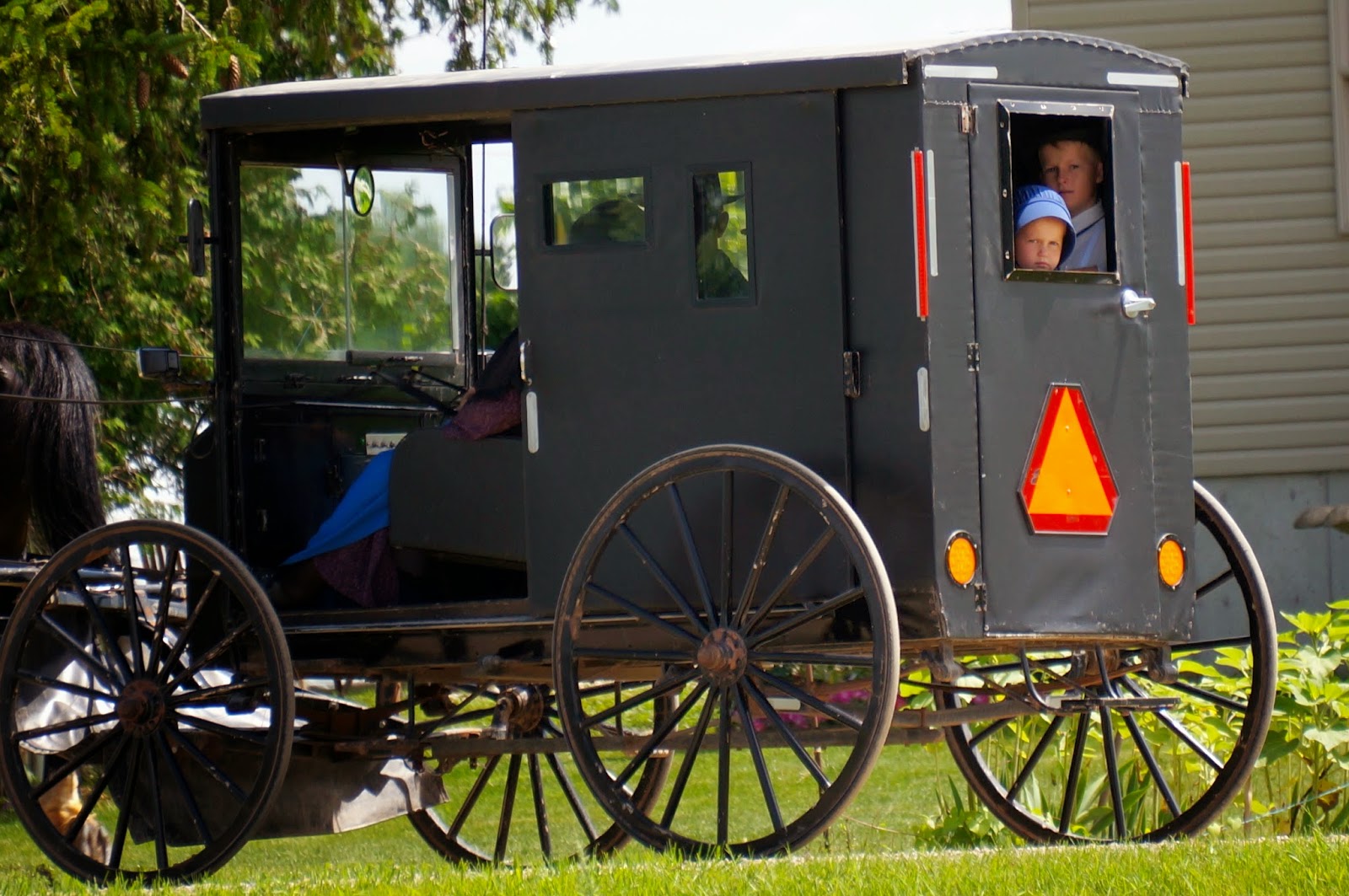 Mennonites out on there Sunday visits 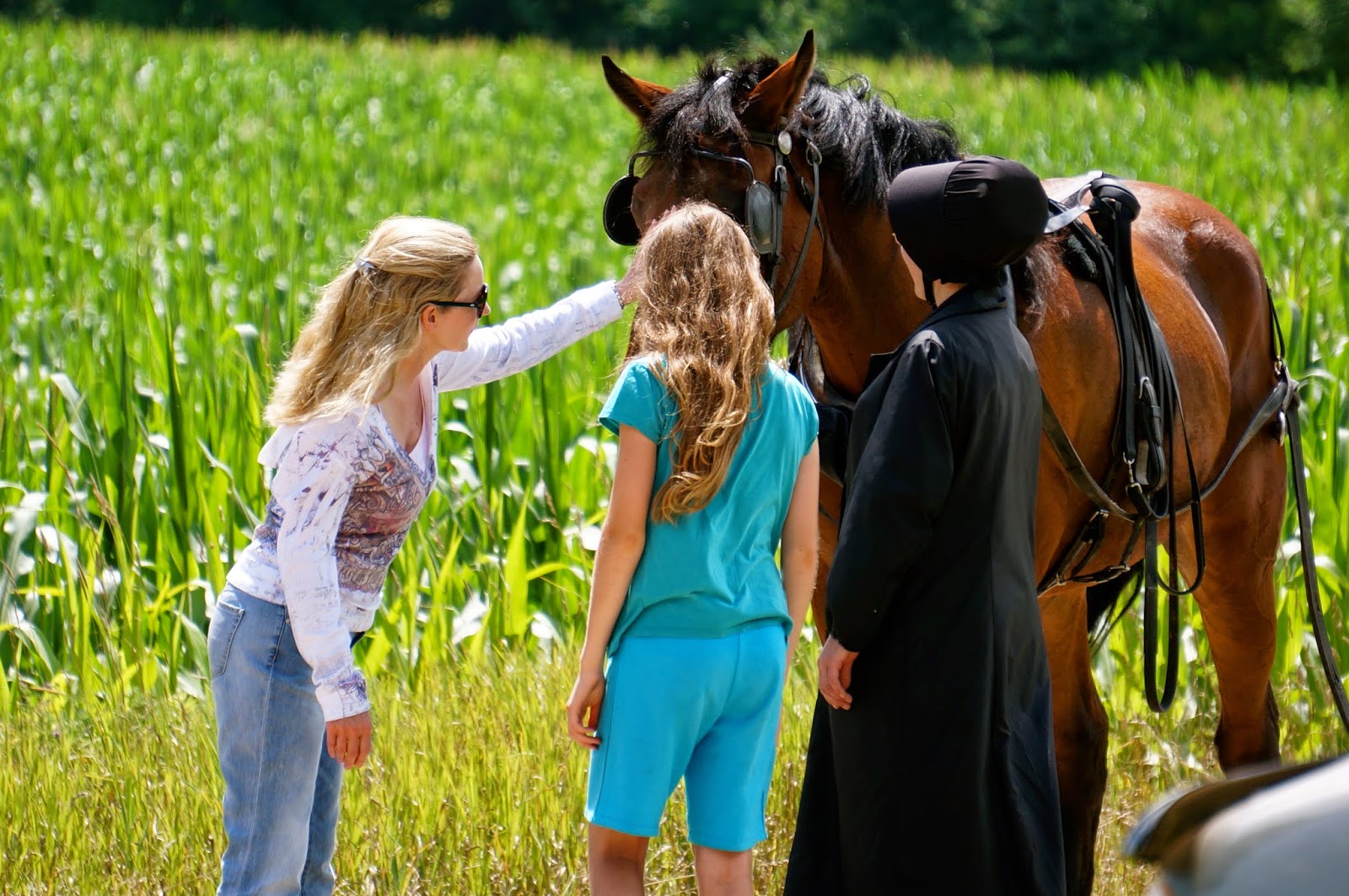 Cindy & Sophie getting some horsey time with a neighbour 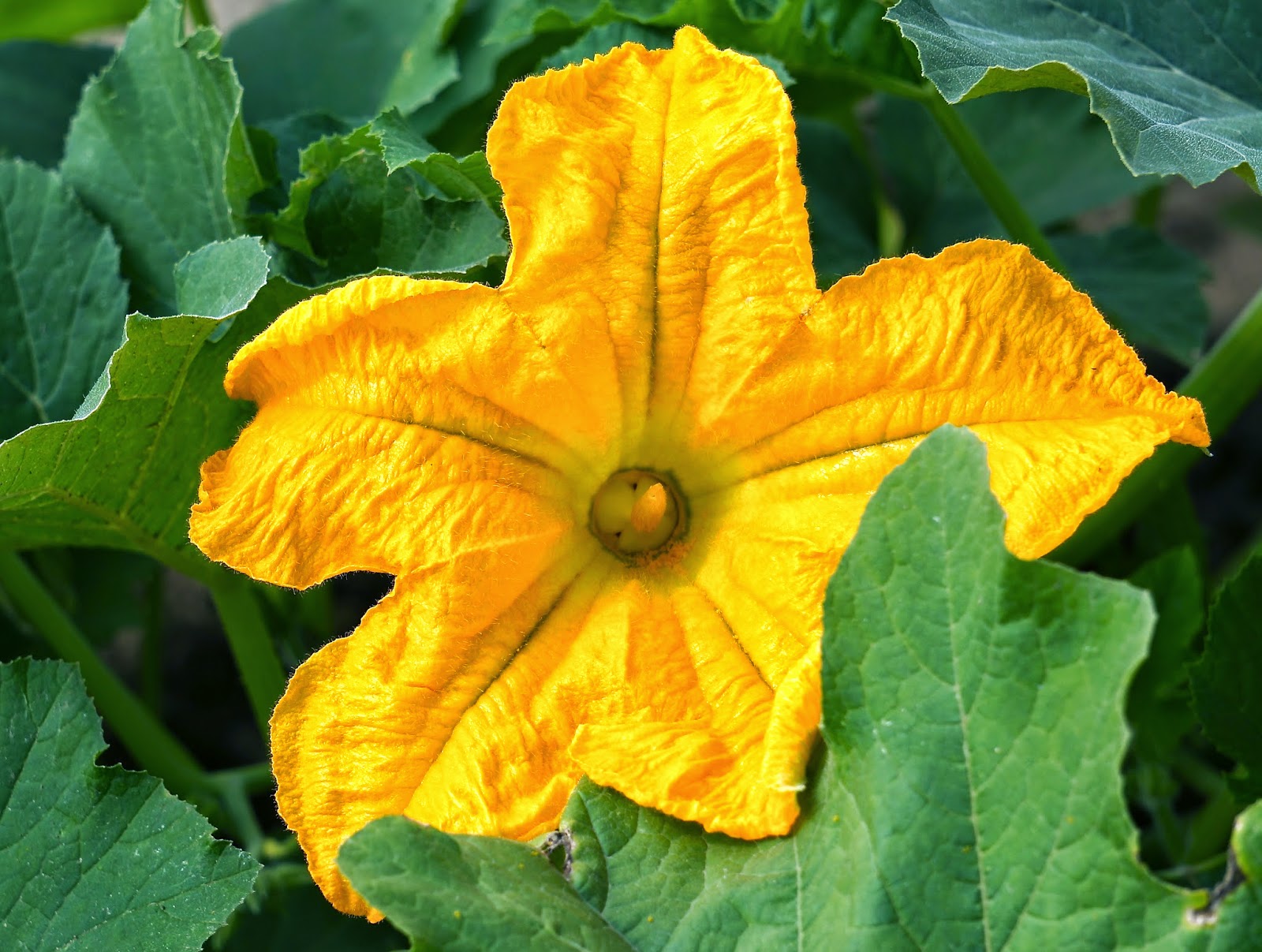 The pumpkins are flowering in Fred's garden 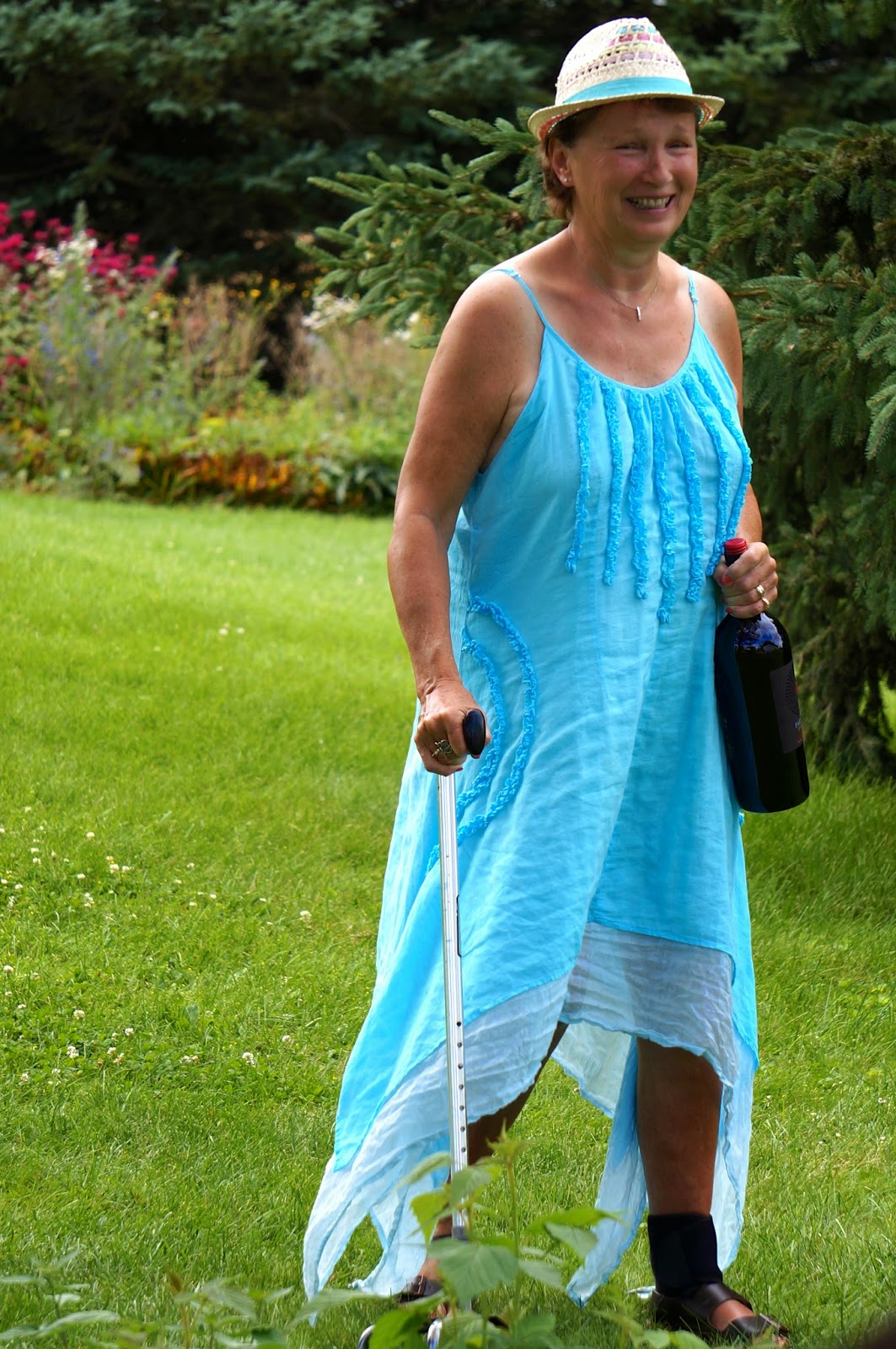 Liz, our hostess with her wine and cane.
She hurt her ankle and the wine was helping....lol 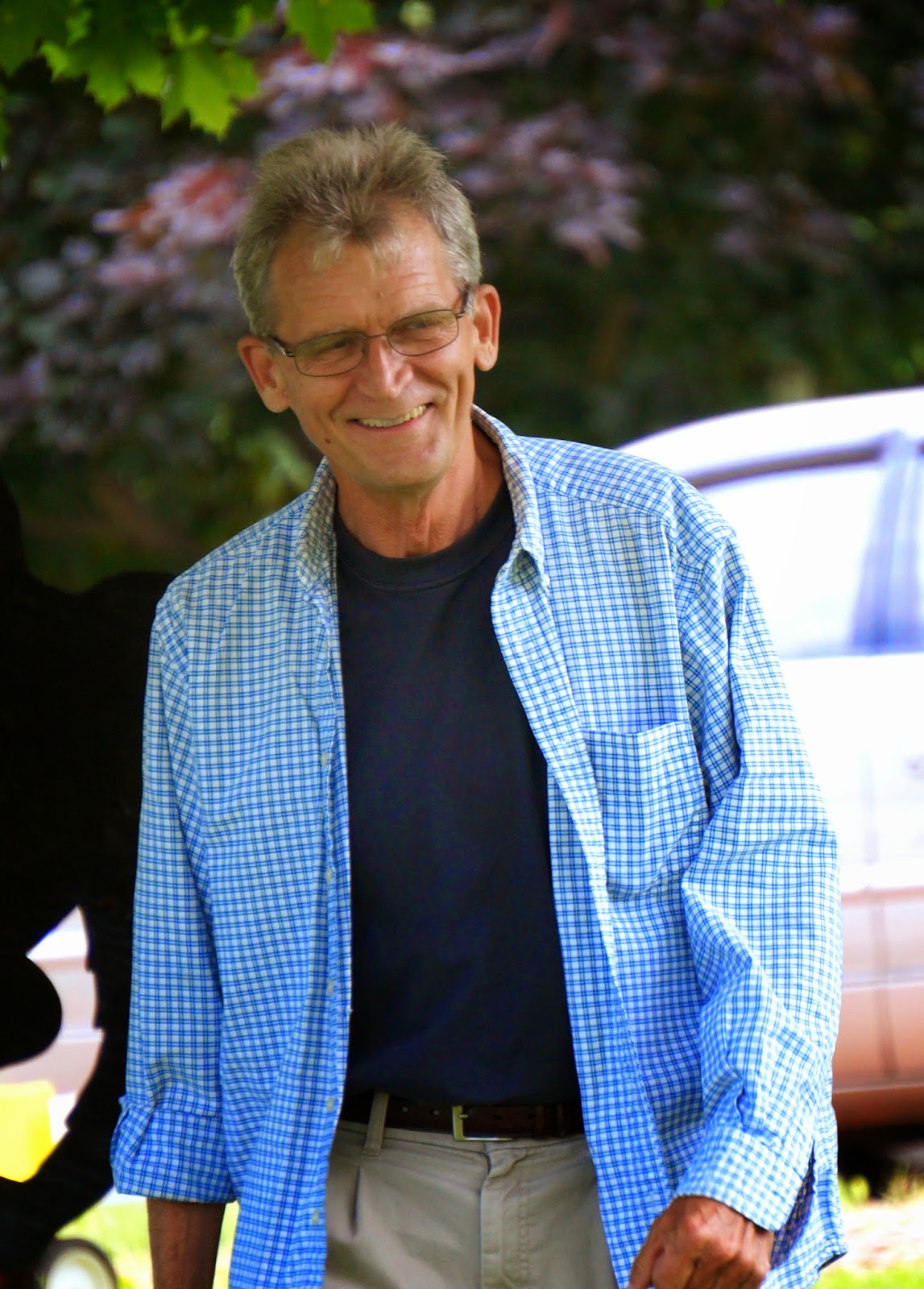 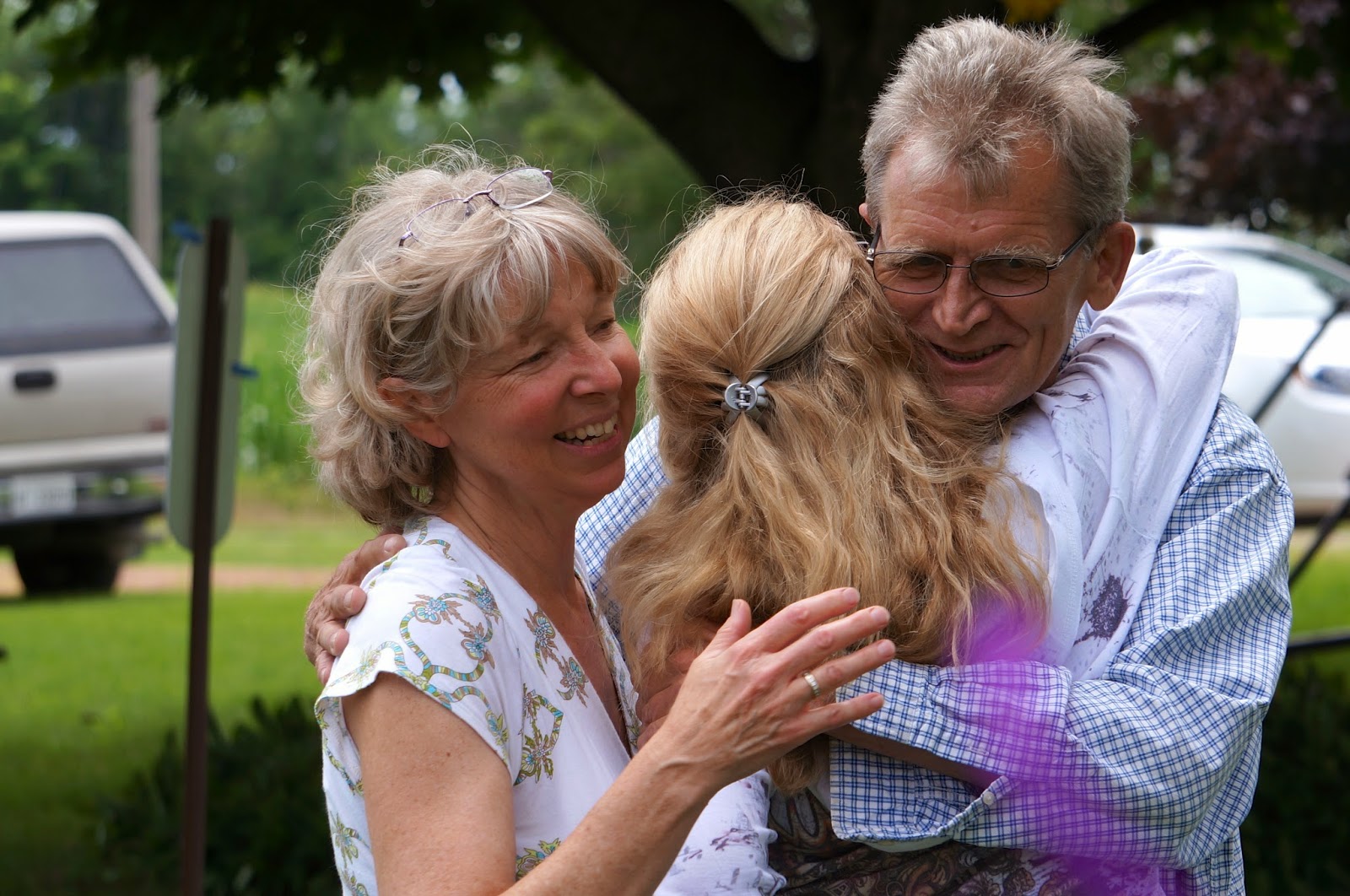 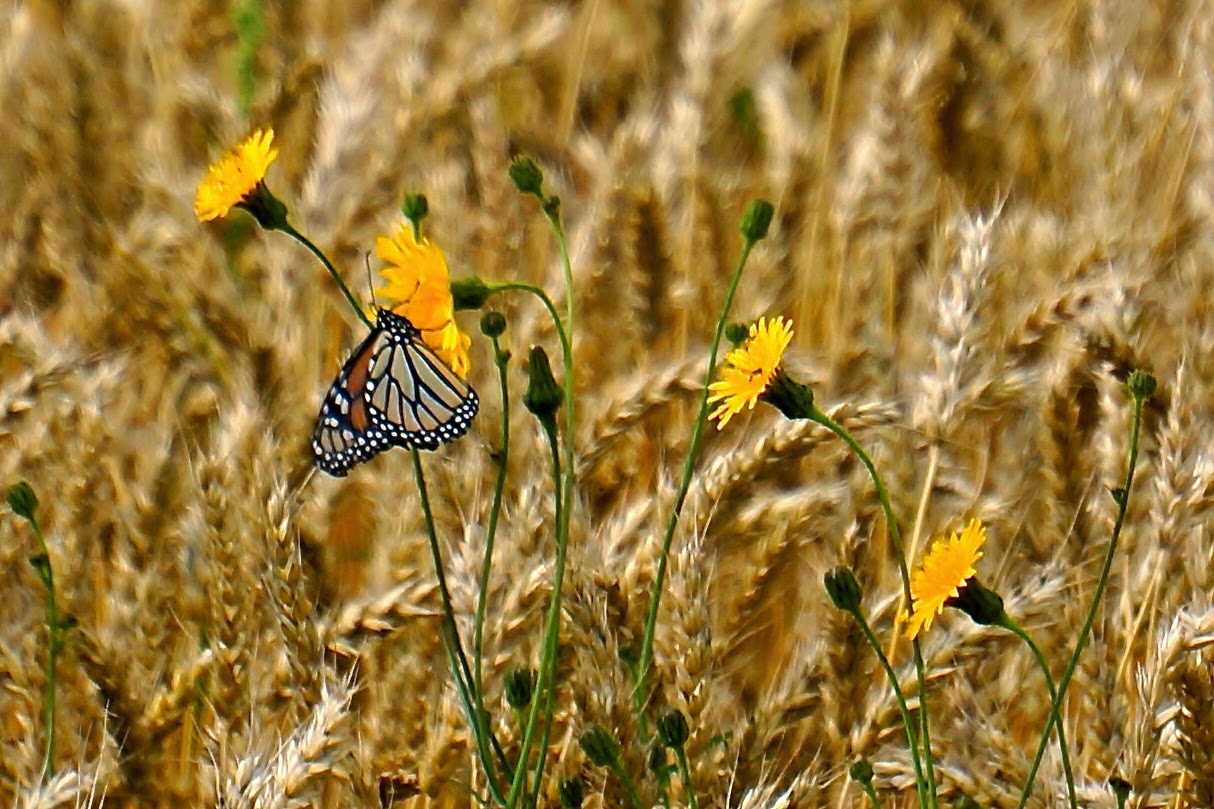