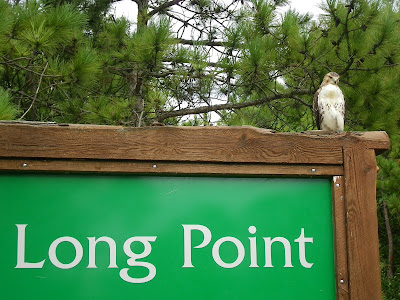 As we drove up to the entrance of Long Point we were greeted by this amazing hawk. I was able to get out and take some fabulous pictures. It was keeping a close eye on me but was not disturbed by my presence. He must have been sent to make up for our last trip here!!!
Posted by Maureen at 12:50 PM 1 comment: 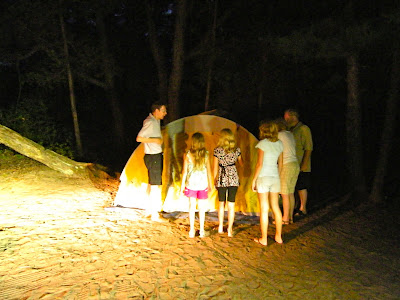 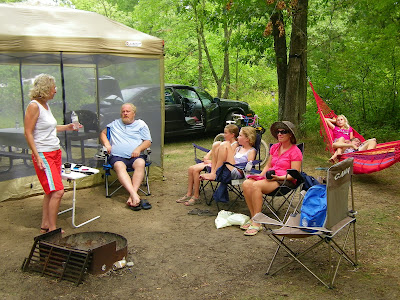 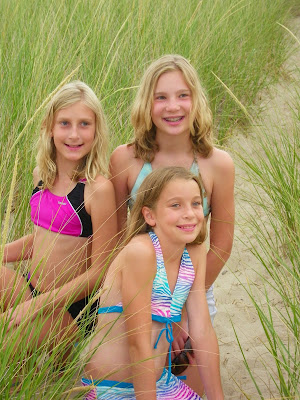 A great time was had by all.
Janet, Sophie, Joe, Deborah, Taylor and Kaitlyn joined us for the week-end. They brought tents and set up in the dark as it was a late arrival for them. We learned we can accommodate 8 people quite comfortably in the cottage during a 4 hour rain storm and still have room for some to nap!!! Supper was prepared and enjoyed during the rain. We had 2 great campfires and the SMORES were delicious. I walked along the beach with Janet and we did some rock collecting along the way. The girls did a cycle/canoe trip on the river while we packed up for our trip home. Hoping to do it again next year.
Posted by Maureen at 12:05 PM No comments: 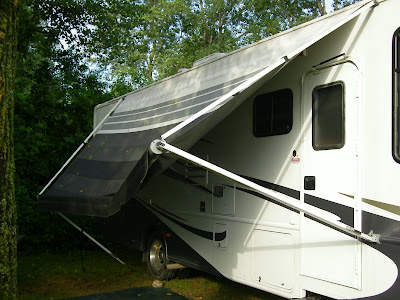 AWNING
Disaster at Long Point two weekends ago! Not only were the mosquitos really bad, deer flies as well, but we got hit with a tremendous downpour late Saturday night. Normal procedure on set up upon arriving at any campsite when setting up the awning is to set it with one end lower than the other, to allow any rain to drain off. For some reason that weekend we did not follow standard operating procedures! Can't explain it, just a brain fart! We set the awning up level, it poured down rain, rain pooled on awning, awning support barrel collapsed while we were attempting to drain the rain off, this was around 1am. Maureen and I both got drenched when it collapsed, bugs eating us alive in the middle of a bad storm, much cursing and swearing. All we could do was leave it till morning to deal with. In the morning light, still much speaking of bad words, and kicking one's self in the hind quarters for being so stupid. After much consideration and pondering of what to do next, we rolled the awning up as best we could and drove home. So new awning on order to be installed Wednesday, nothing of the old one could be salvaged. Of course could not count on Sicard's RV to help, they said they would look at it on August 16th, order the replacement, which would take 4 weeks to come in, so maybe they would have it replaced by September. Called Mobile Life RV they got me in this past Wednesday, ordered the replacement, which will be in by Monday, they will install it on the 10th, six days before Sicard's would even have a first look. Only bright spot (pun intended) of the weekend was getting to see a large contingent of fireflies light up the evening, what a spectacle to see these tiny bugs flashing all around us. Great time on the beach but got really badly sun burnt, still peeling the dead skin off two weeks later. Duncan.
Posted by Maureen at 12:01 AM No comments:
Newer Posts Older Posts Home
Subscribe to: Posts (Atom)