This was our first trip that far east in Ontario and Bon Echo was a great park to visit. The drive was a long one as we had to contend with the Toronto traffic on a Friday of a long weekend. We stopped on Leslie Ave. in Toronto to pick up our niece Sophie as her mom Janet was coming from Montreal to meet us there for the weekend. Janet had arrived before us and had her tent up and was out exploring some of the park when we pulled in. We set up camp and visited at our site before enjoying supper and getting some wood to enjoy an evening by the fire. Janet took a couple of bowls and spoons for cereal in the morning so that her and Sophie would not have to disturb us to early in the morning. Well, turns out that we were up long before they were as they both slept till almost 10:30. We had a late breakfast together and headed to the Visitors Center and Greystones Gift and Bookshop to purchase tickets to go on the Wanderer Tour Boat. While we waited for our tour time we explored the area around the channel between the upper and lower Mazinaw Lake. While out on the boat tour of Upper Mazinaw Lake we saw close-up views of the majestic Mazinaw Rock and on its long flat face we saw Aboriginal pictographs, ancient cedars and a chiseled Walt Whitman verse. It was interesting to hear all the stories as we traveled on the 1 hour ride. We then walked over to the main beach to check it out before heading back to camp. Duncan and I then headed out of the park in search of corn on the cob to have with supper. We found corn as well as a wild blueberry pie, fresh wild blueberries some homemade jam and a few butter tarts. After a feast of many different things we settled down for a great evening in front of the campfire. Just before 11:00 we had a bit of rain so we called it a night.  Sunday we had another late breakfast and Janet and I rode our bikes over to the lagoon to take the Mugwump Ferry across the Lower Mazinaw Lake to the Cliff Top Trail. We climbed and climbed a number of stairs and followed the trail over dirt, tree roots and large rocks to get to the top and enjoy the amazing view of the park. On our trip back to our site Janet went for a swim to cool off as it was getting very hot and humid. We had another amazing supper that had quite a variety of foods to choose from. Nothing like enjoying a great meal in natures beauty with your family. After watching the chipmunks and red squirrels who were entertaining us we got comfy and enjoyed the crackle and warmth of our campfire before crawling into bed for the night. Monday we enjoyed a yummy breakfast and a bit of relaxing time together before packing up for our drive home. Janet and Sophie went for a bike ride before they headed back to Montreal. Another great weekend away and it was nice to spend time enjoying nature with my sister and niece. 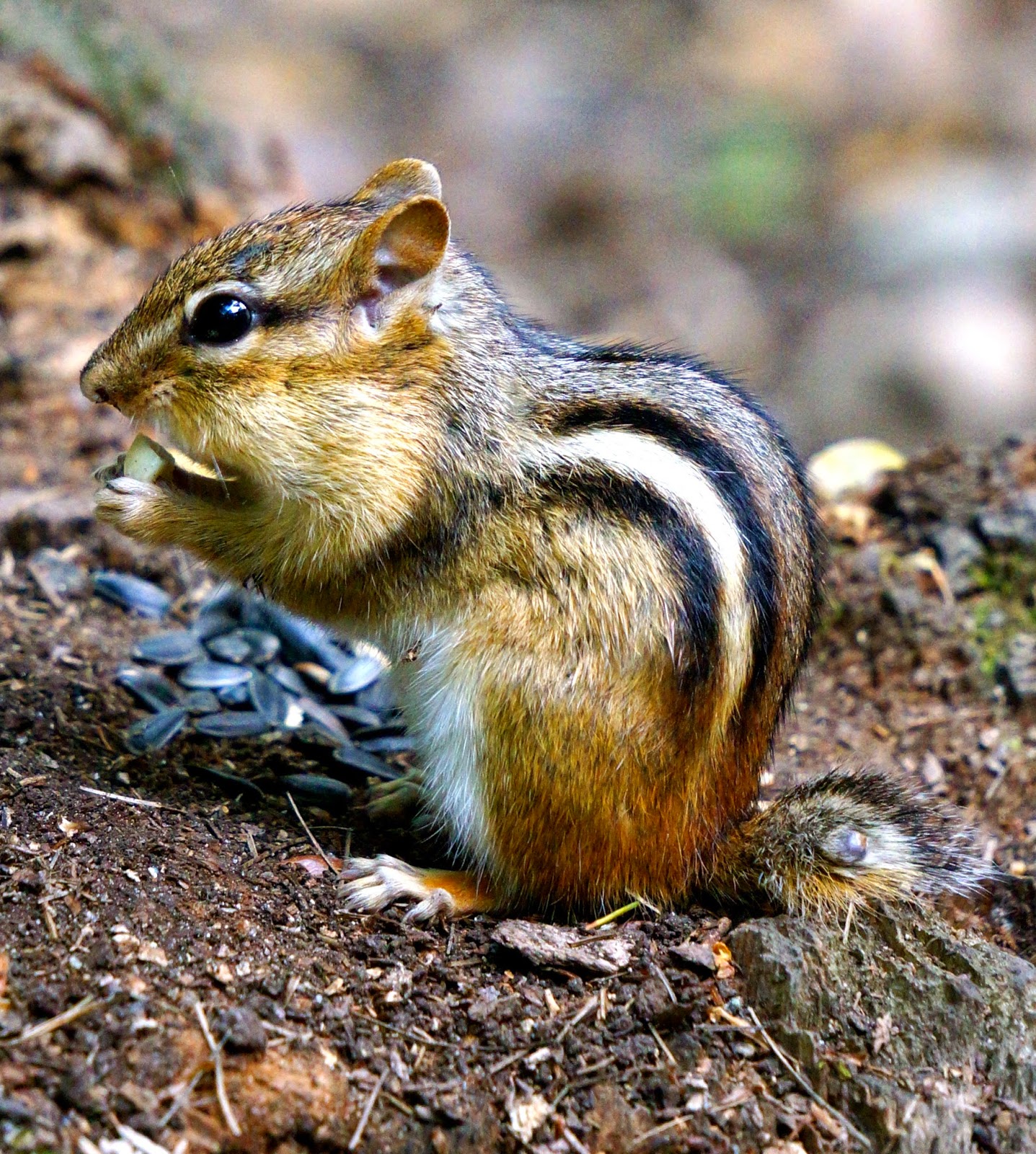 Our first visit. I called her no tail as there was just a stump 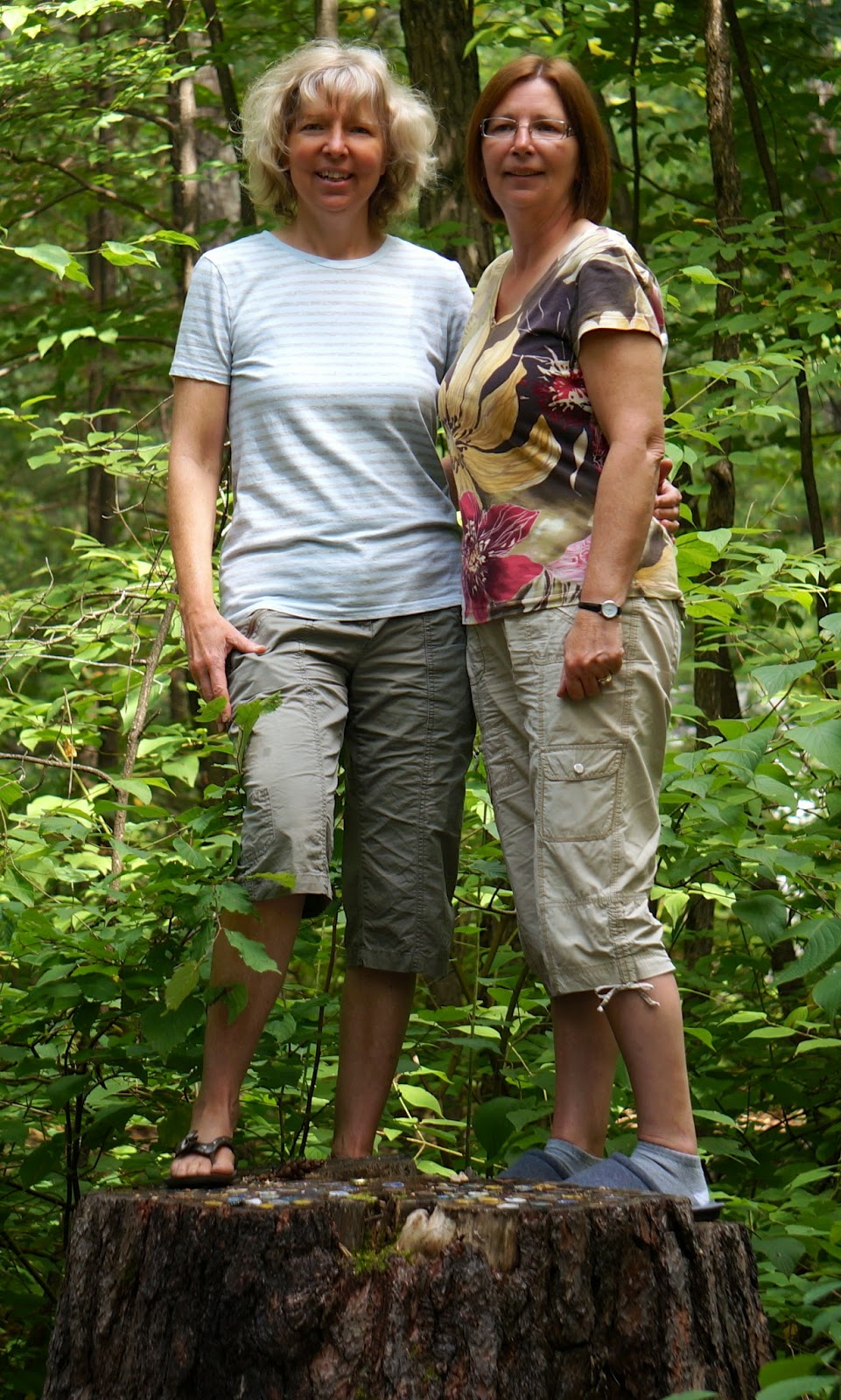 Janet & I standing on this large stump at our camp site that was
covered in beer caps. Janet found a cap and we added to it. 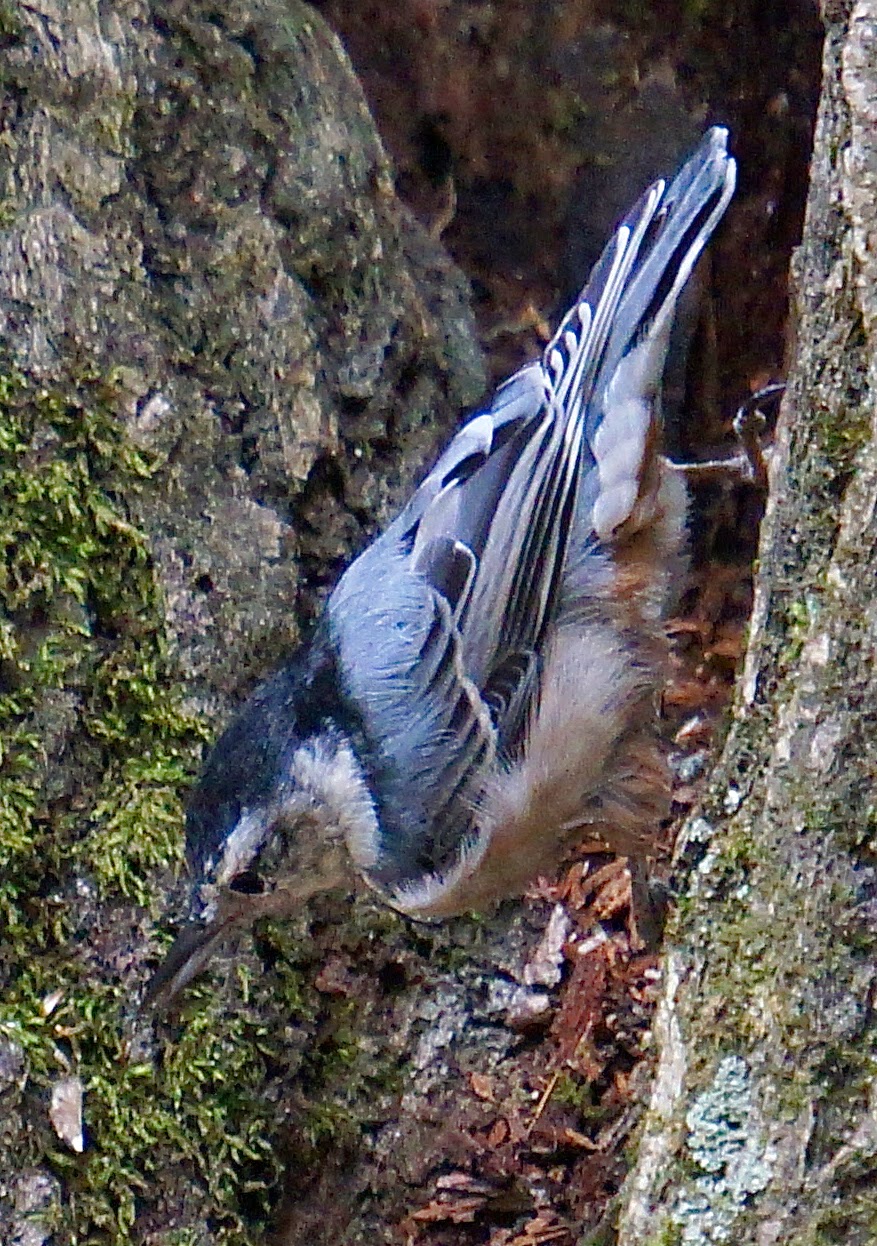 A white-breasted nuthatch stopped by 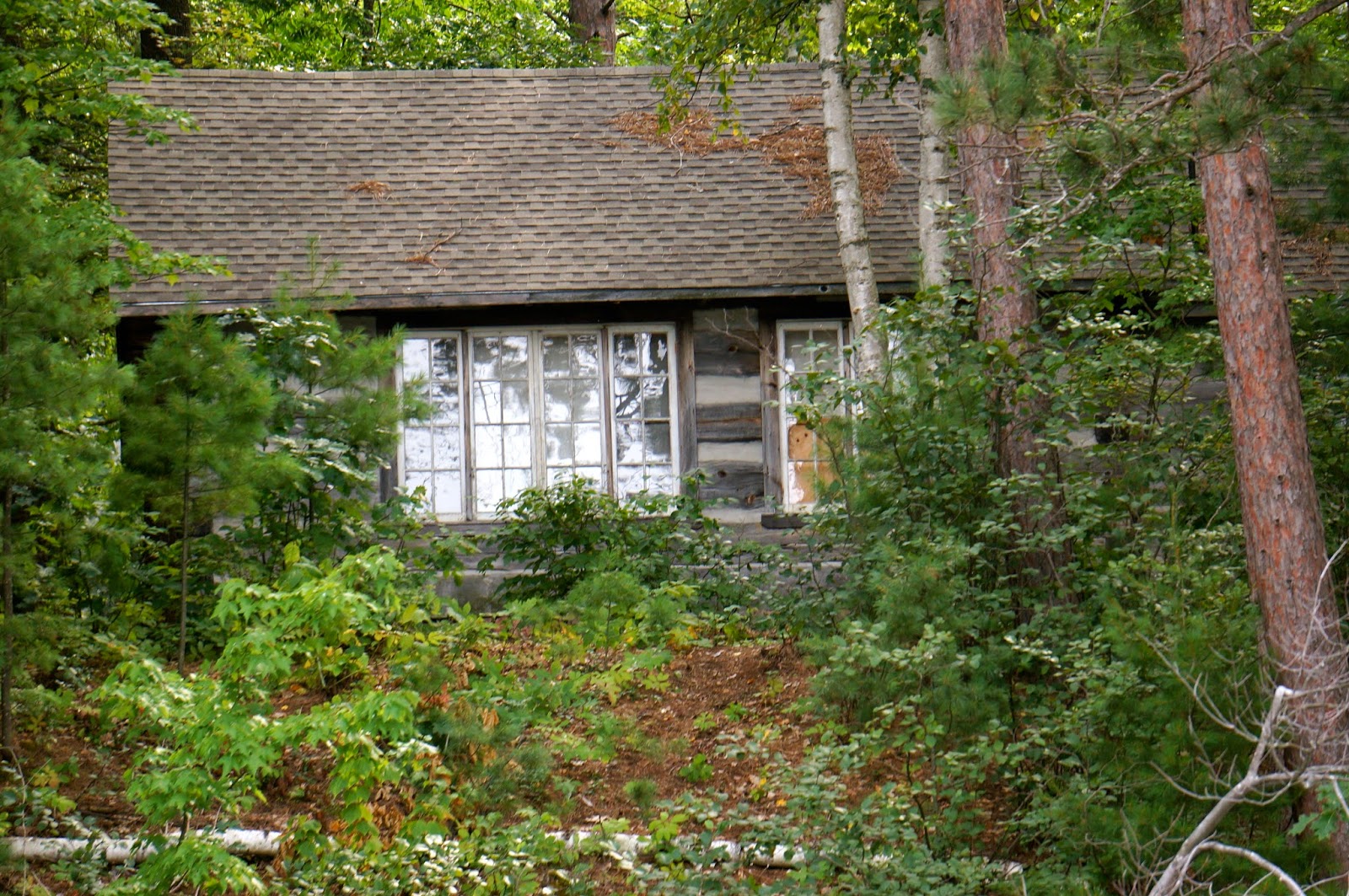 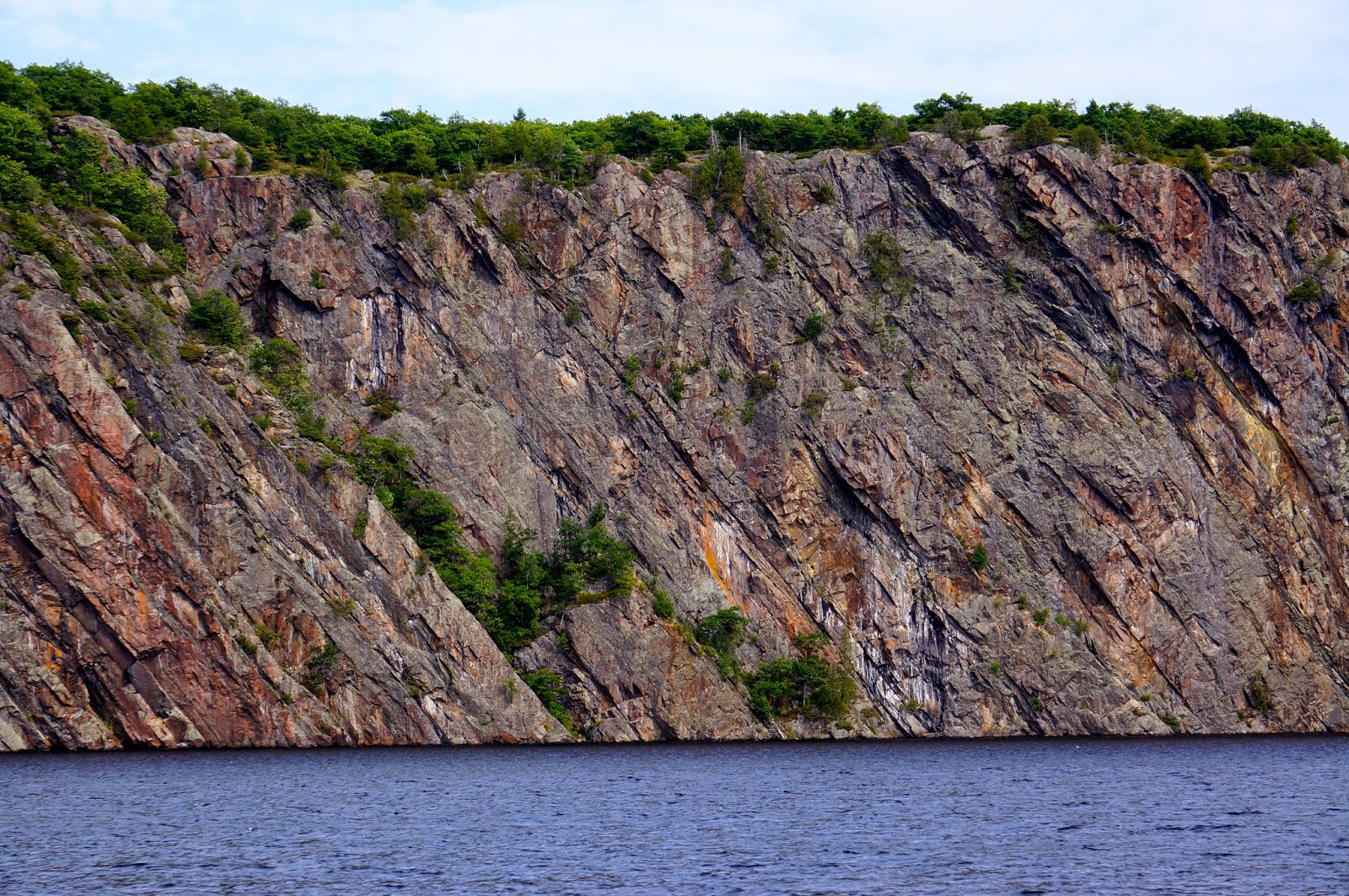 View of Mazinaw cliff from our boat tour 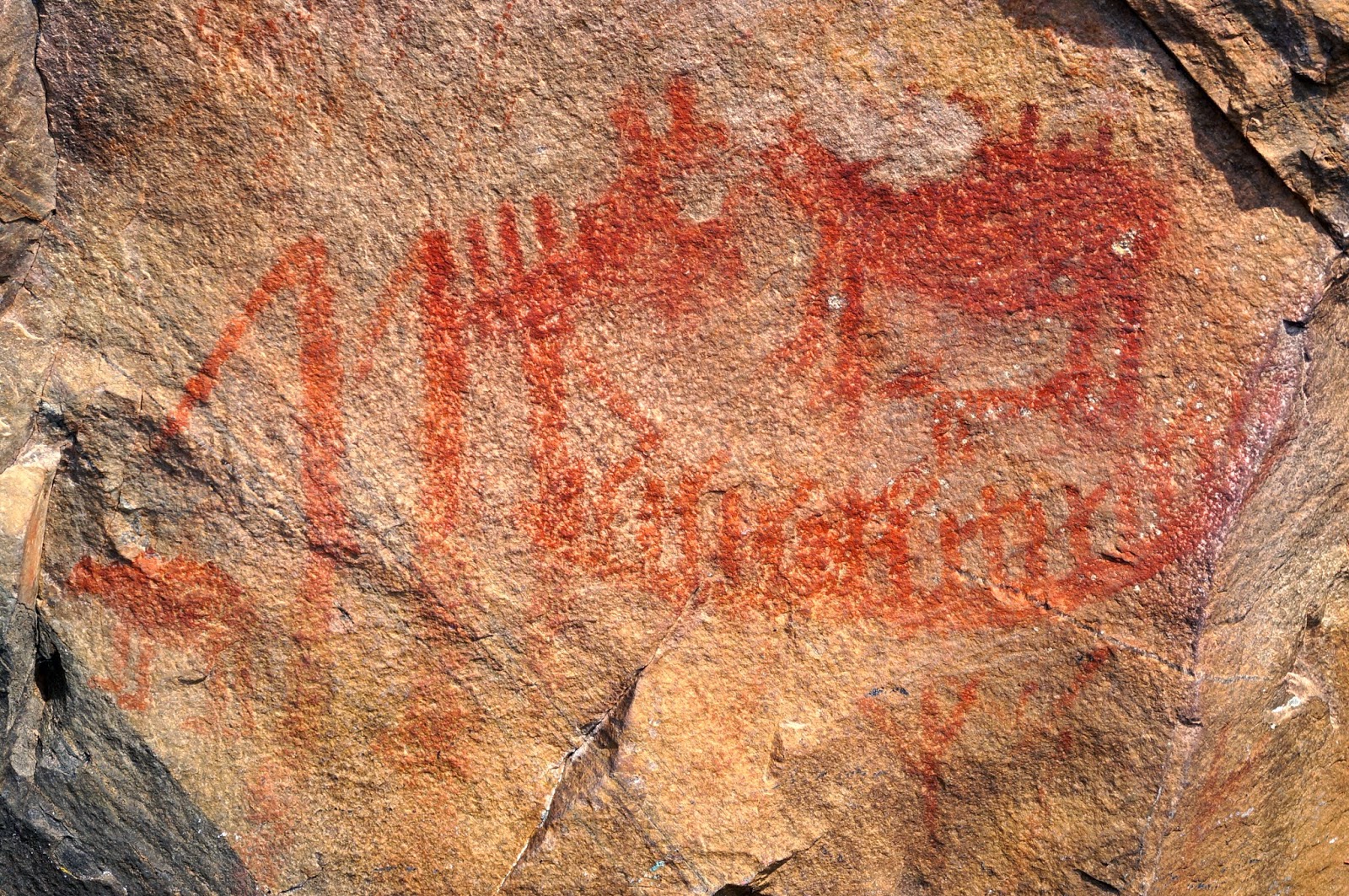 One of the many pictographs on the rock cliff 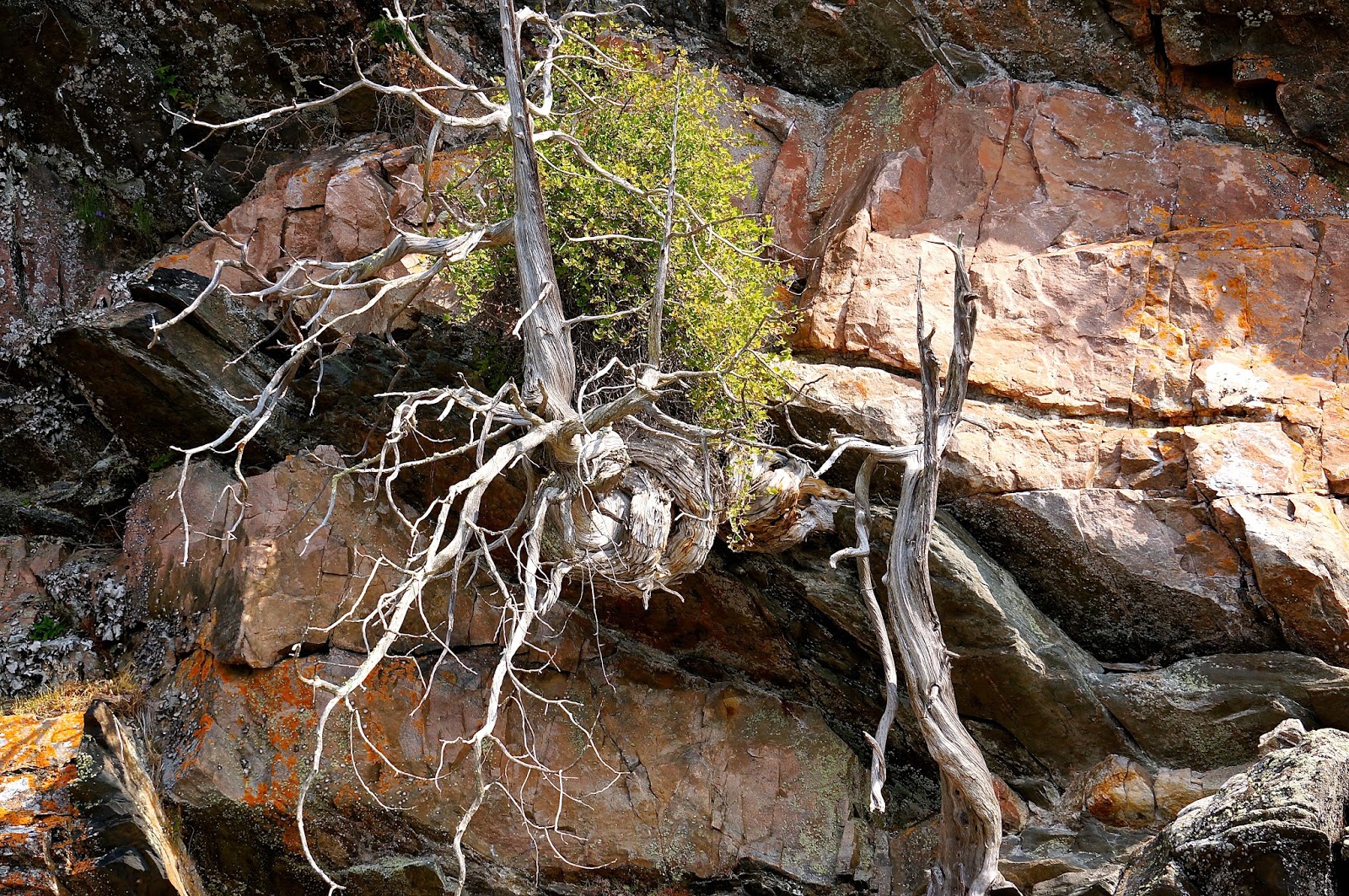 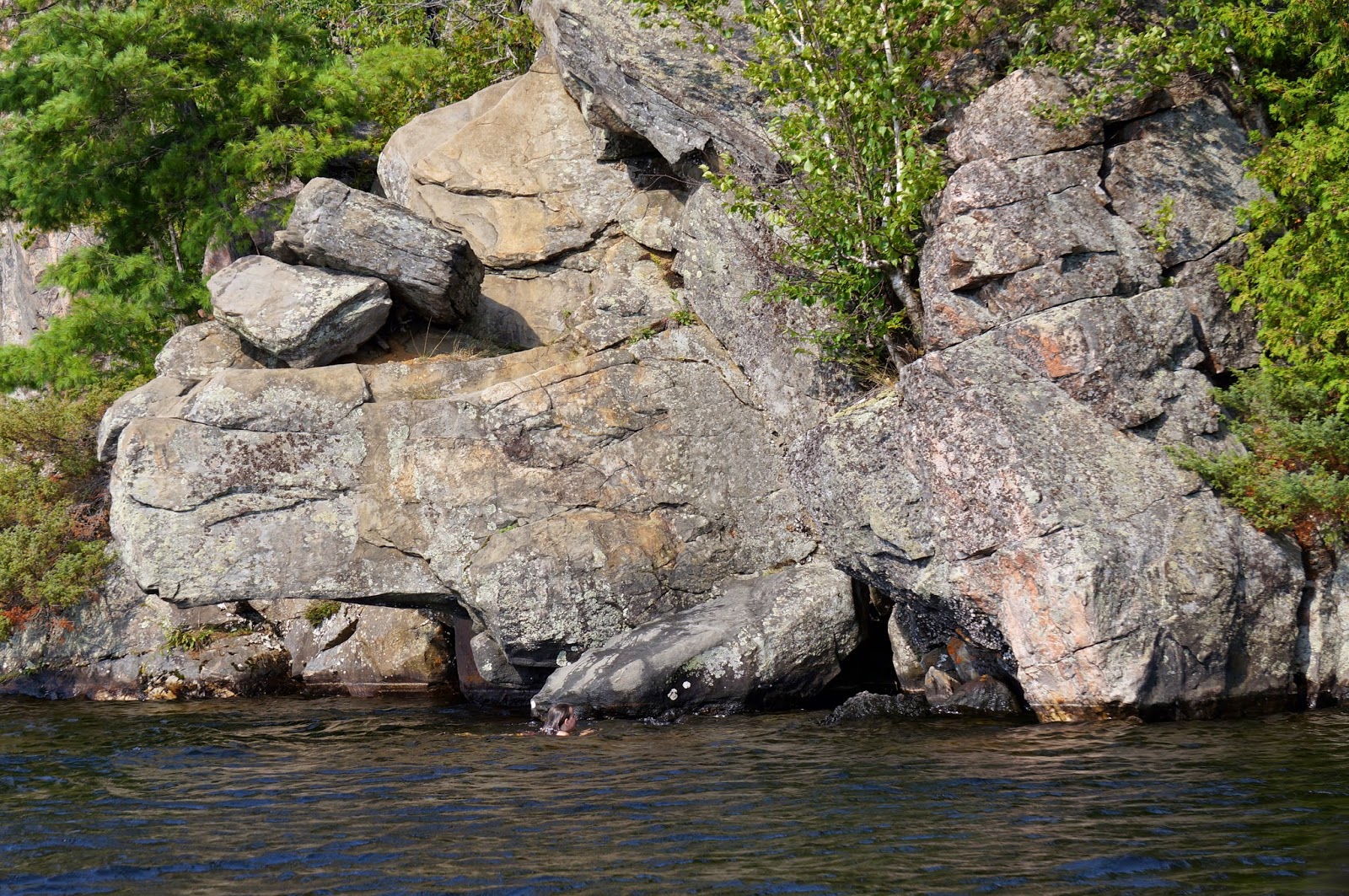 Can you see the turtle shape in this rock? 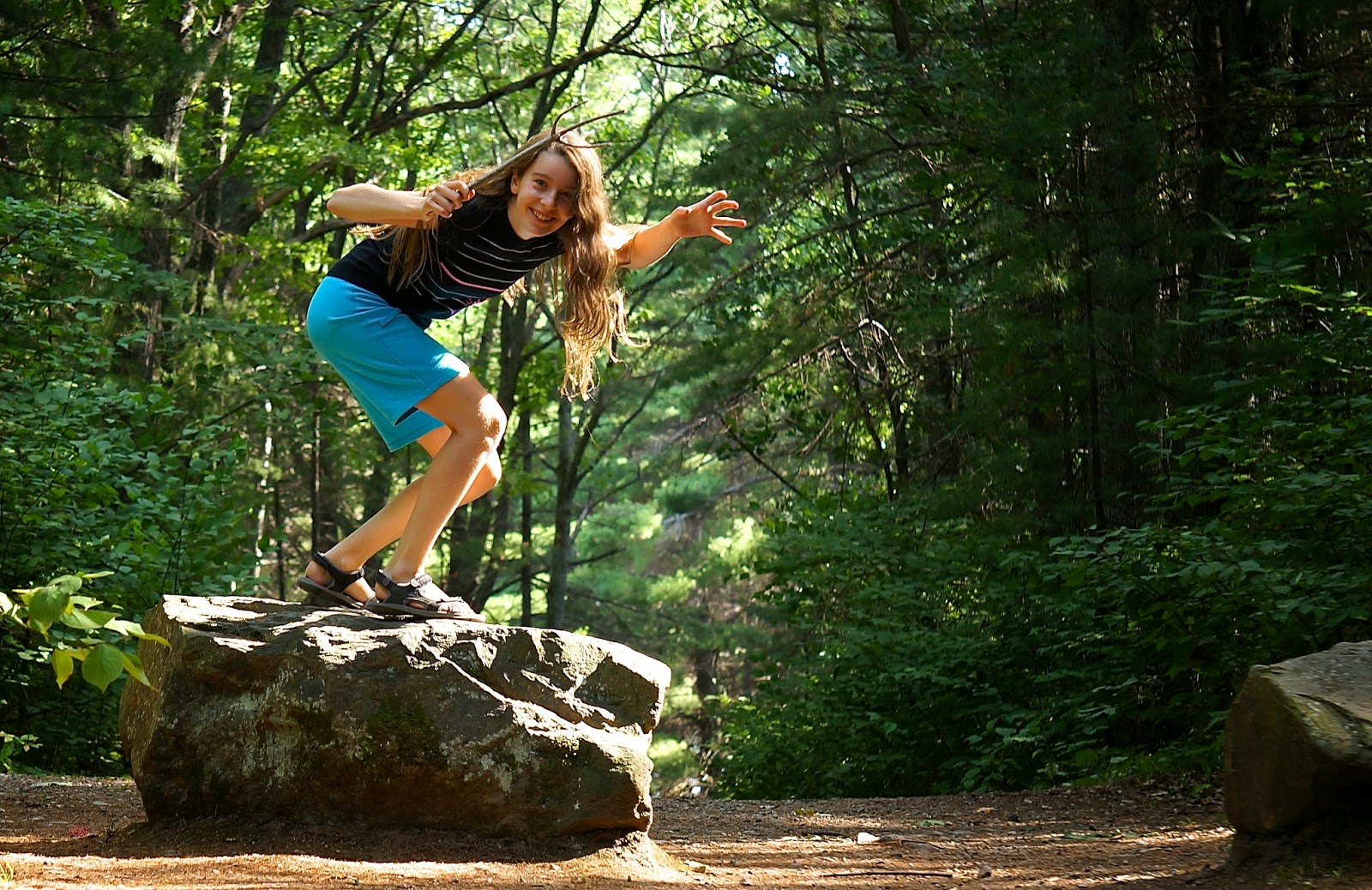 Sophie with the claw branch she found 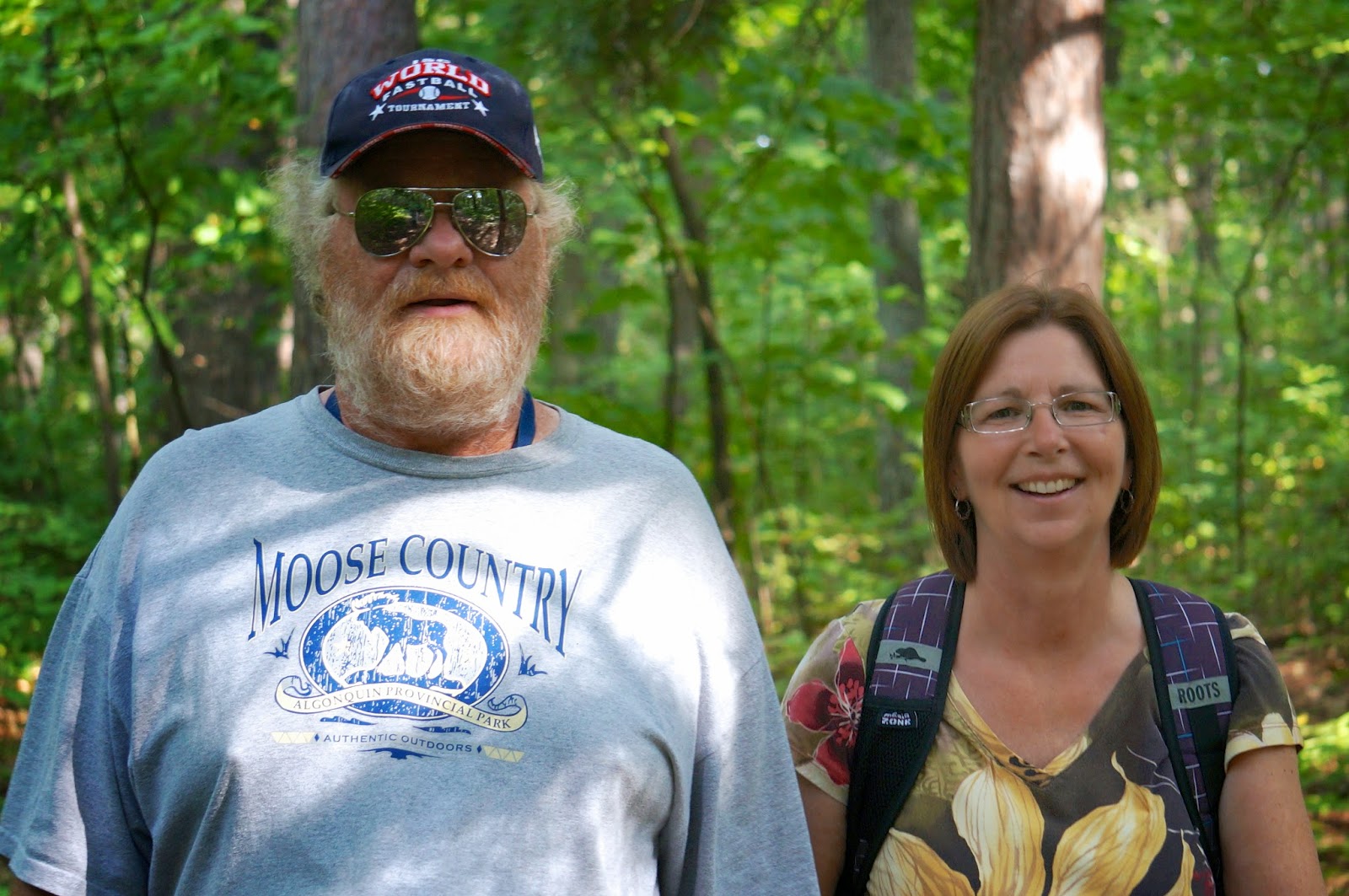 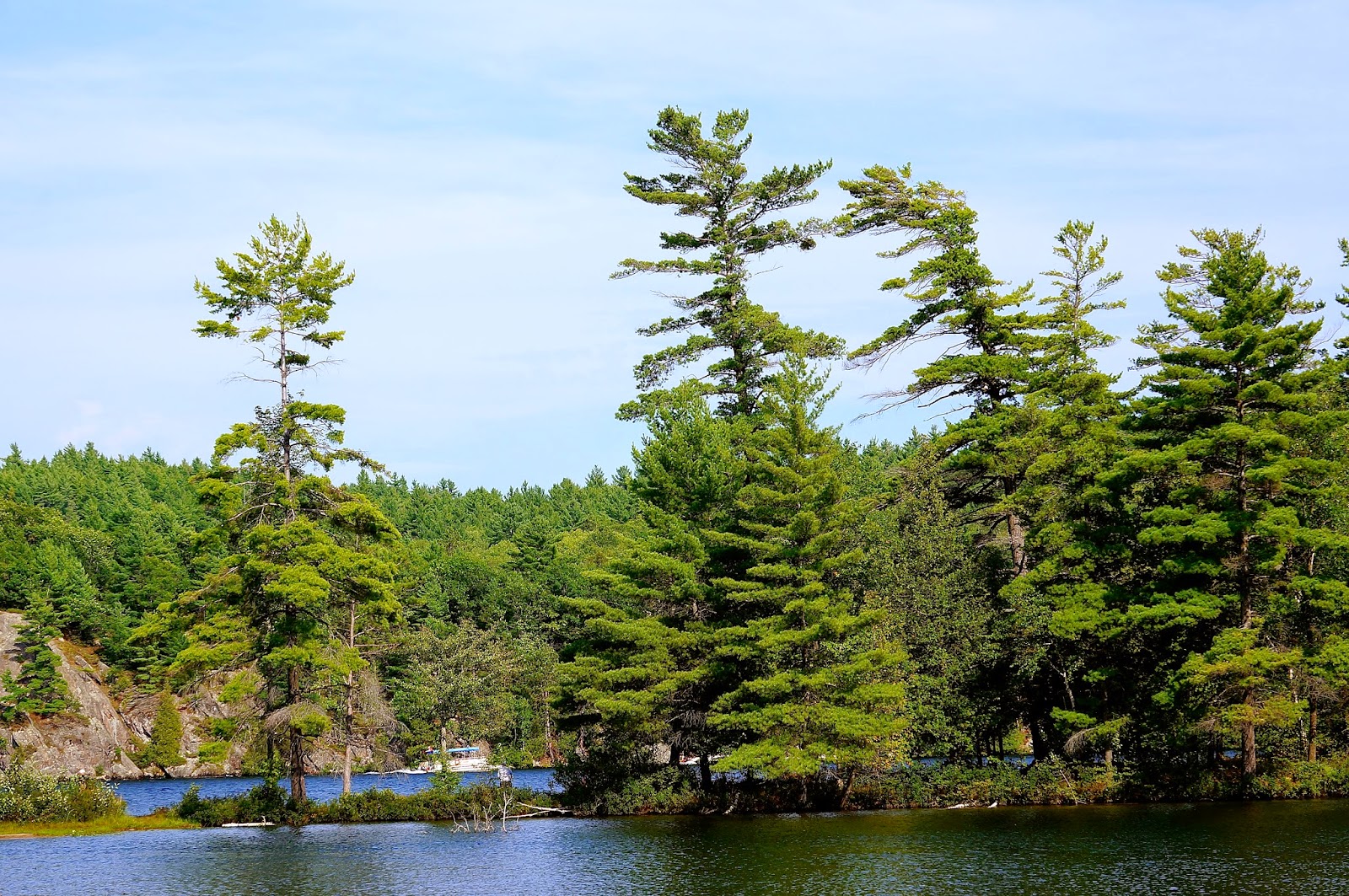 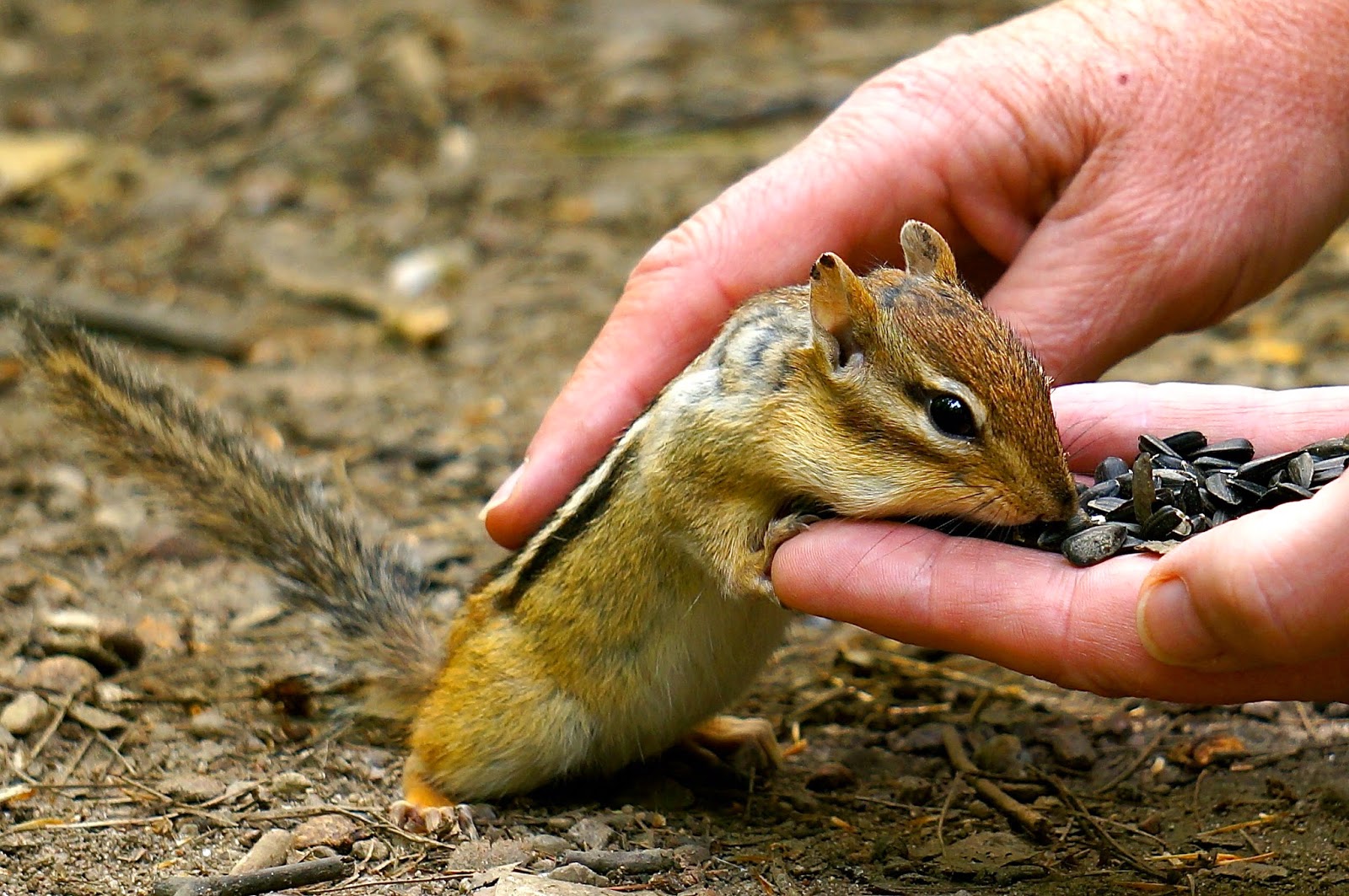 Chippy let me pet her while she enjoyed a few seeds 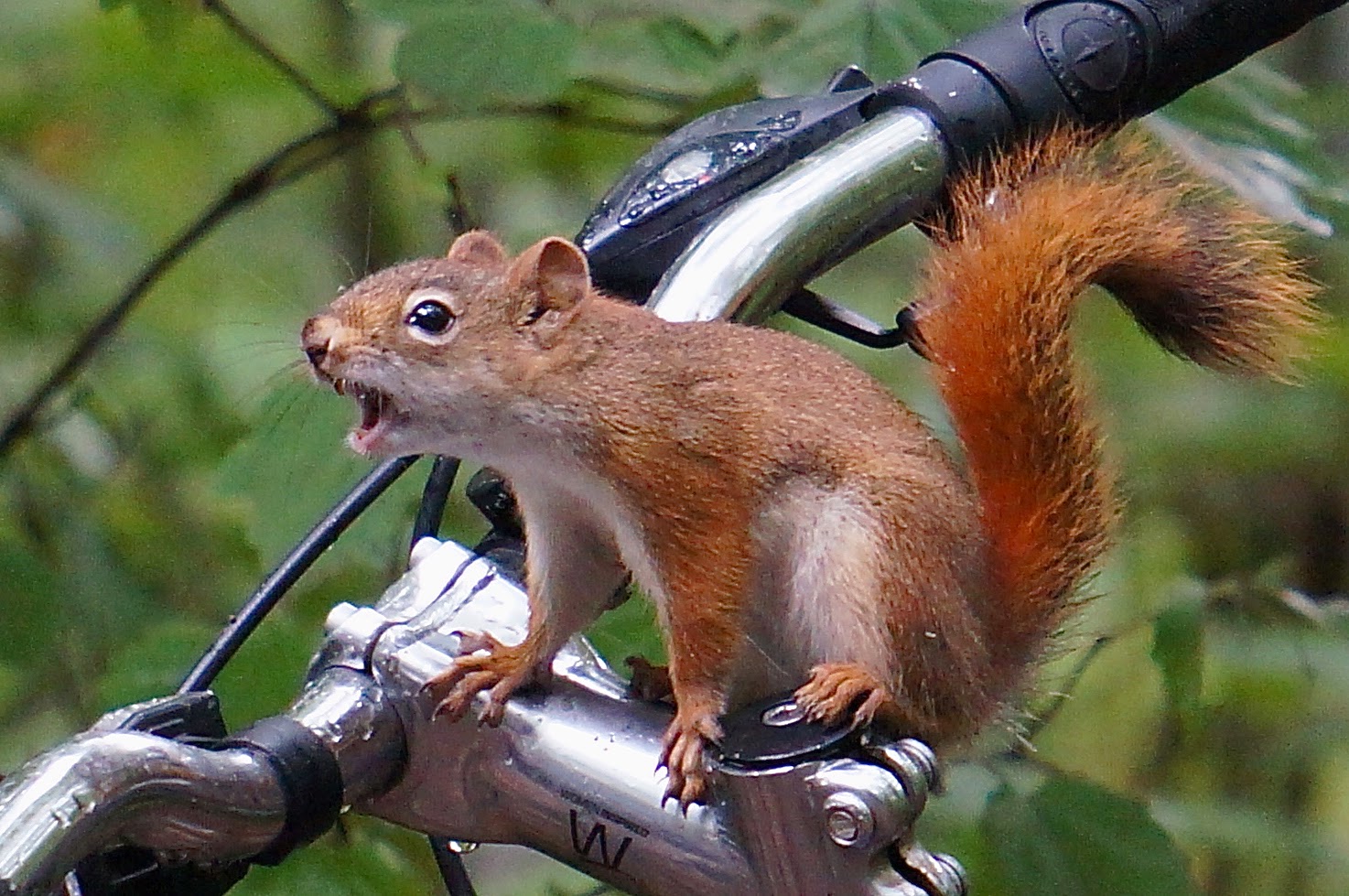 Red Squirrel yelling out... I want to ride your bicycle......lol 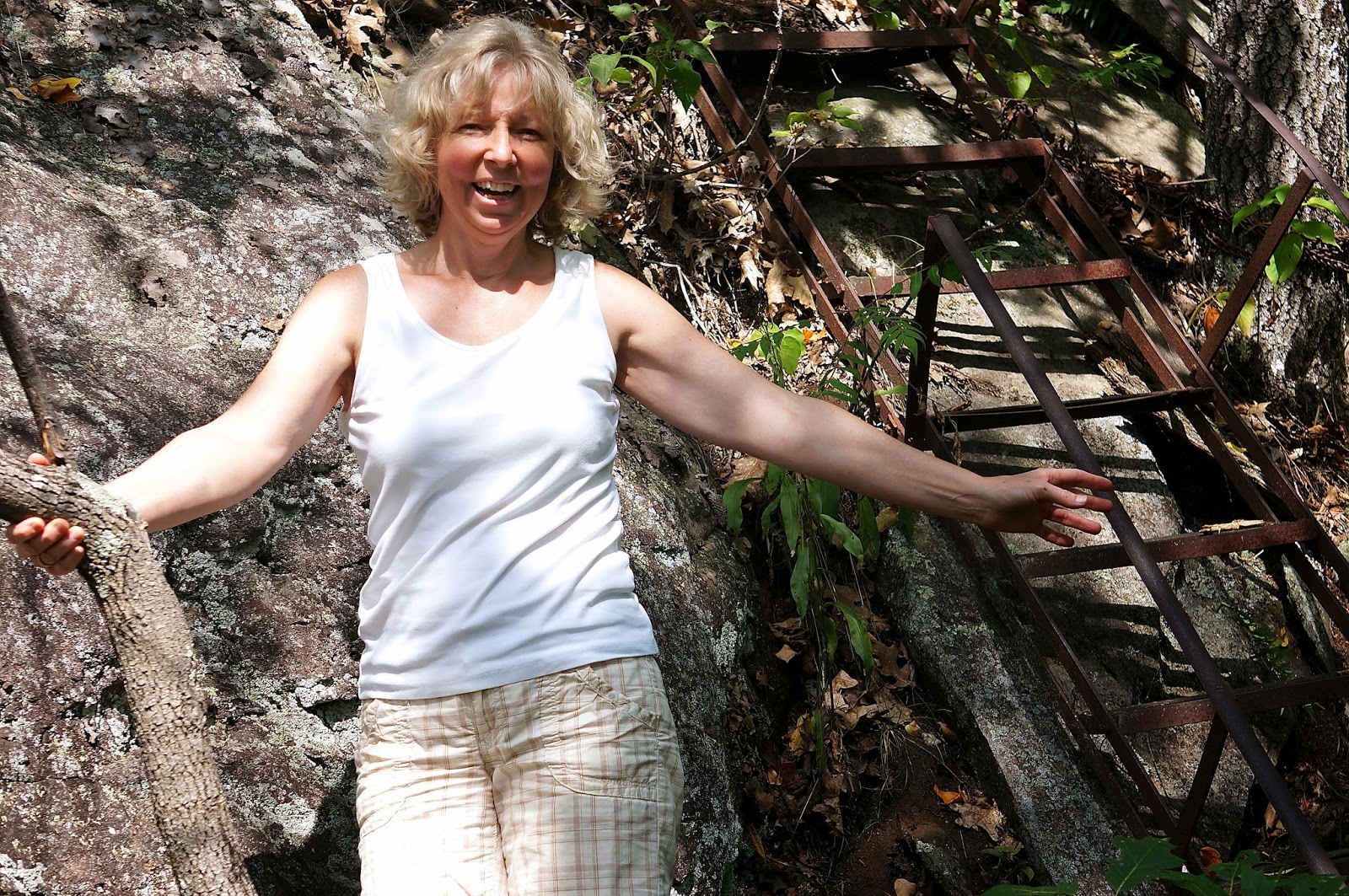 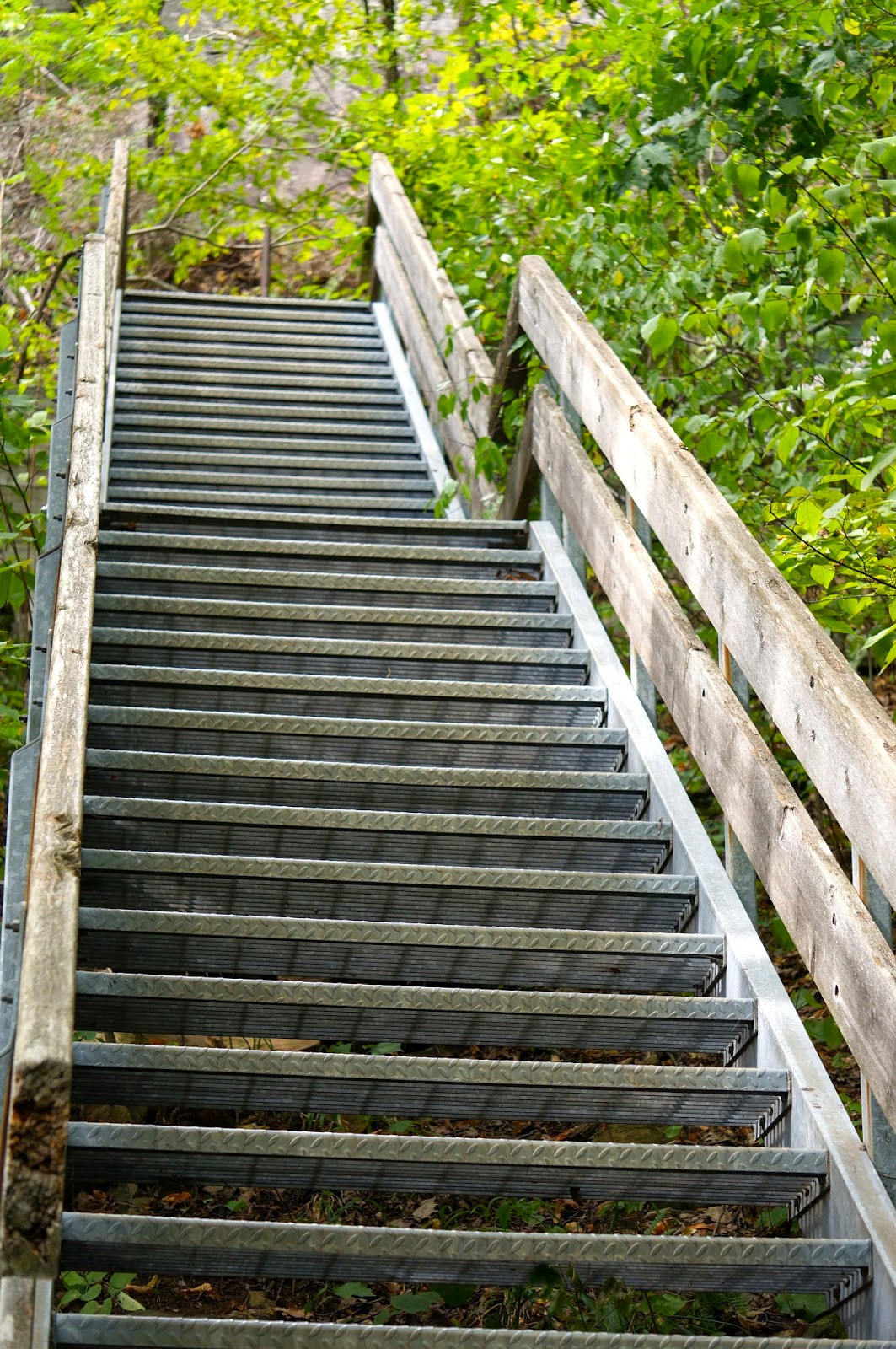 One section of many of the new stairs 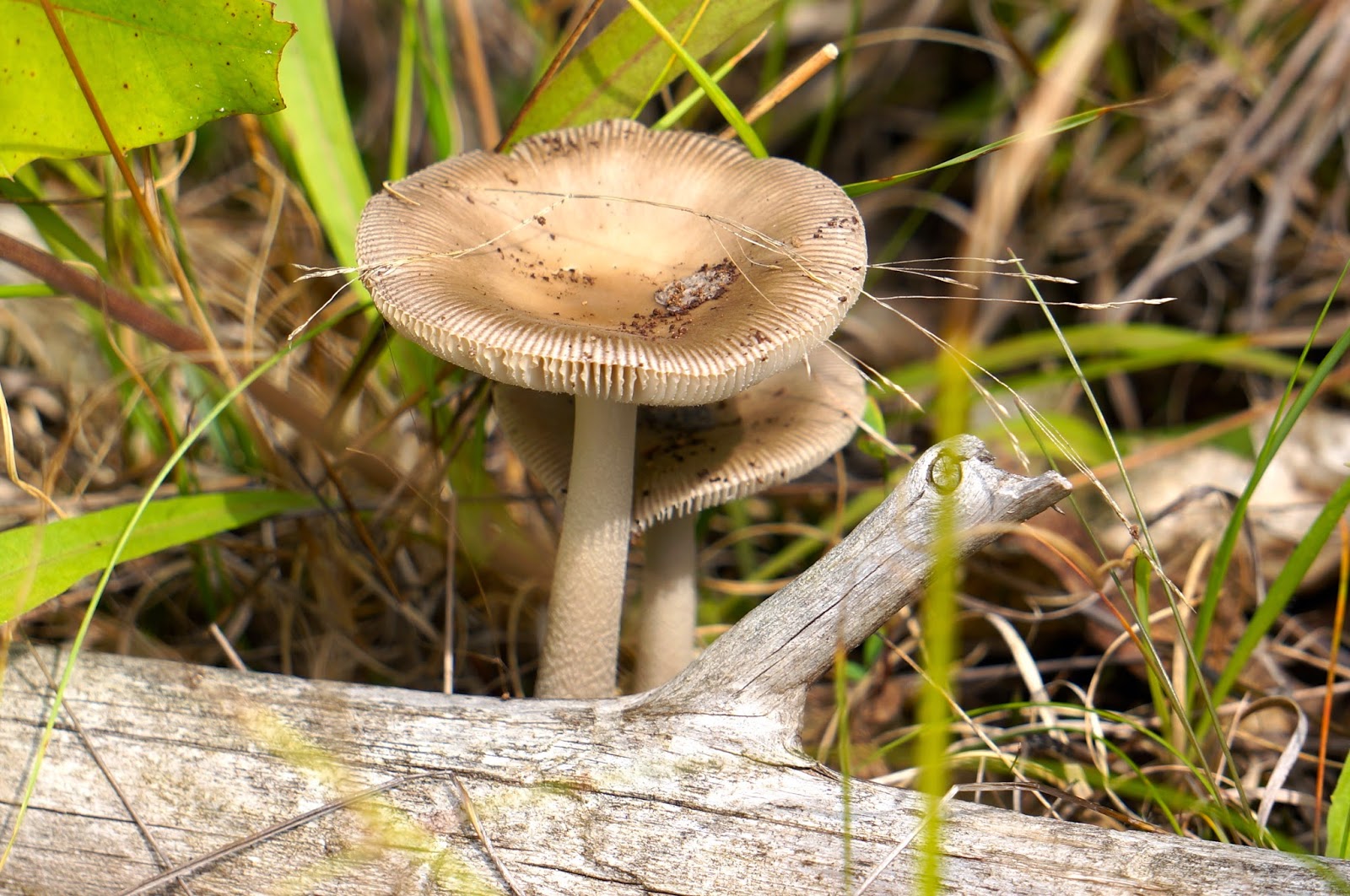 I found mushrooms on our climb to the cliff top 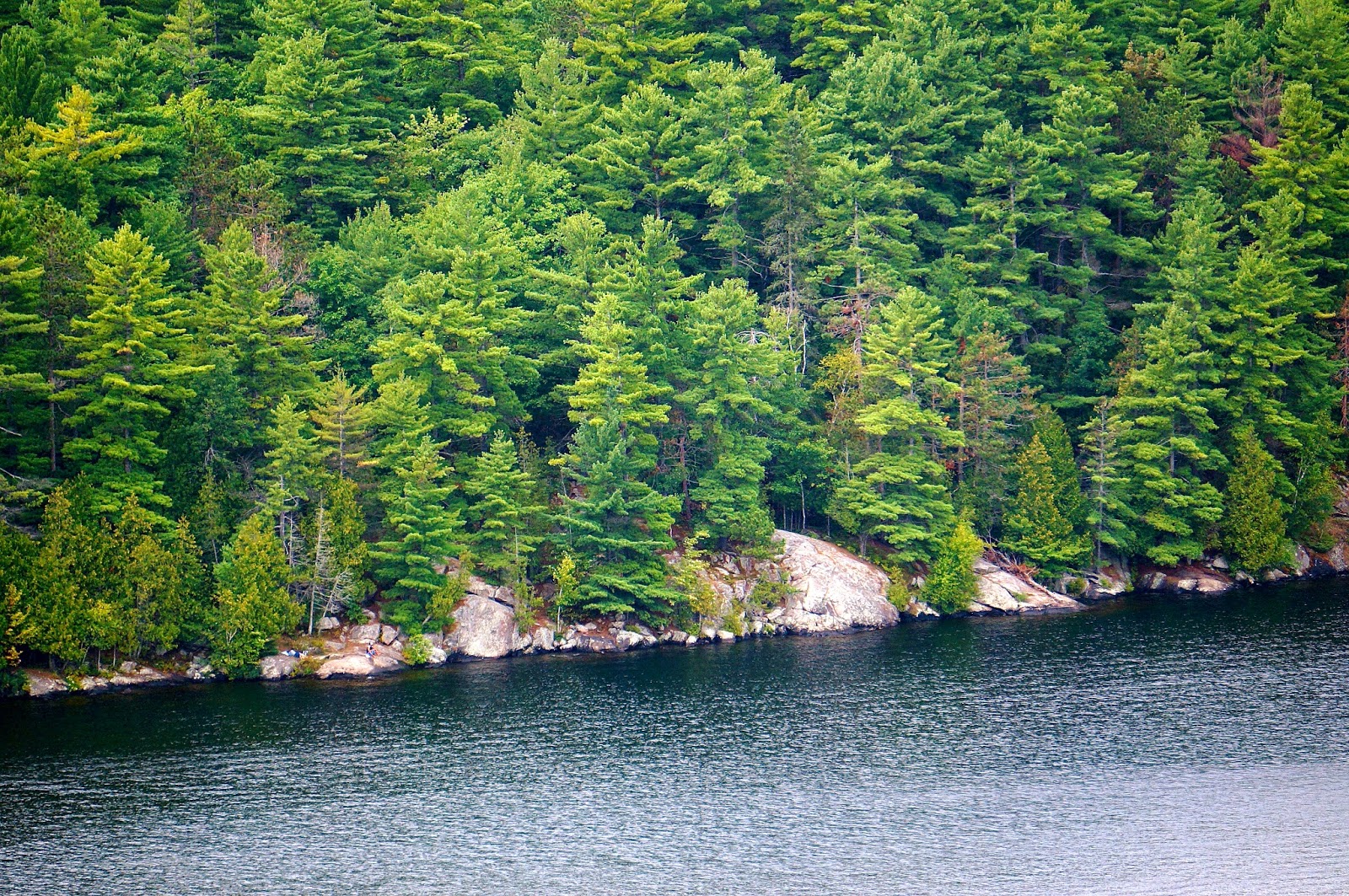 Looking down on the far lake edge from the top 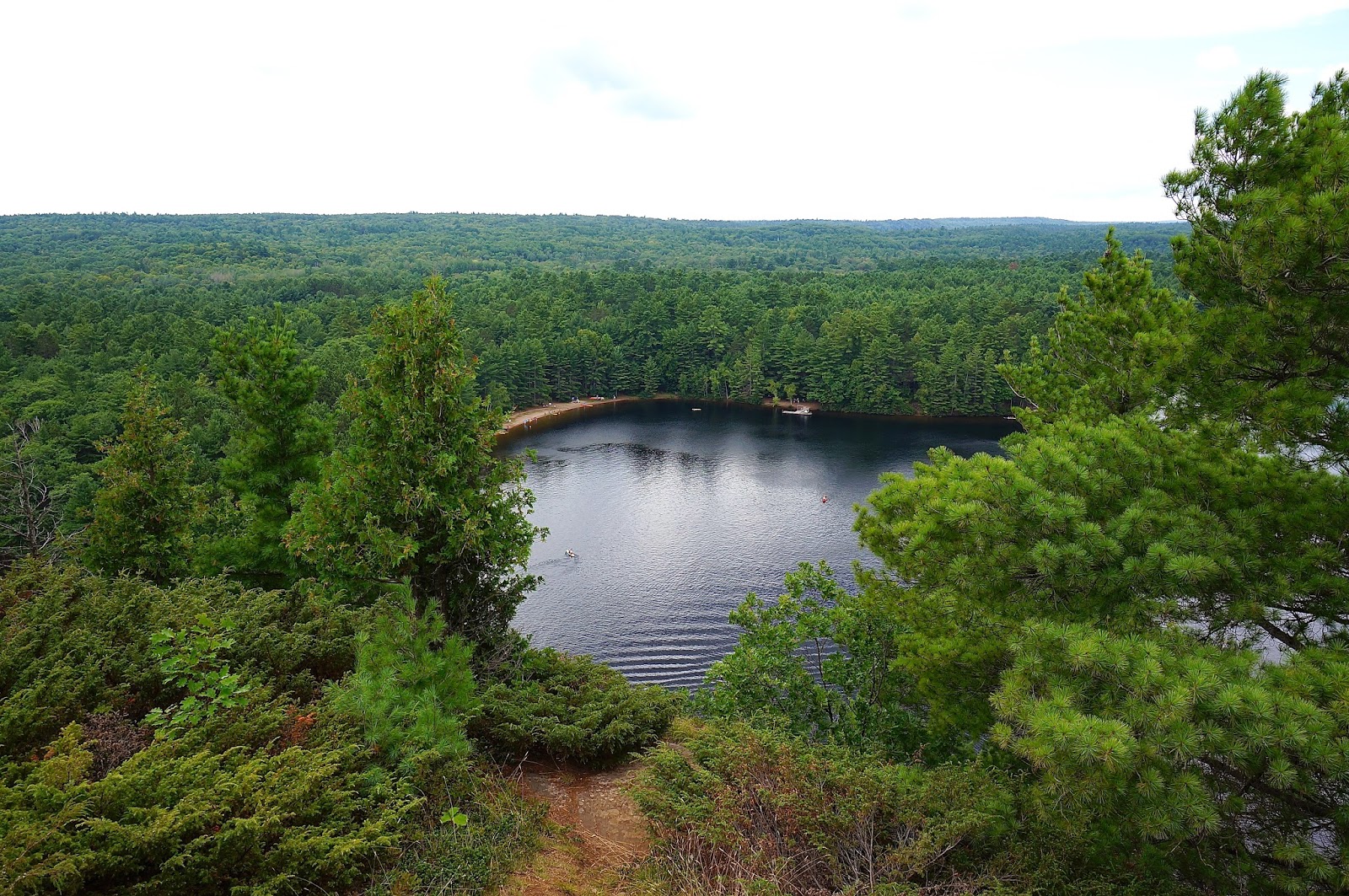 Full view from a lookout platform at the cliff's edge 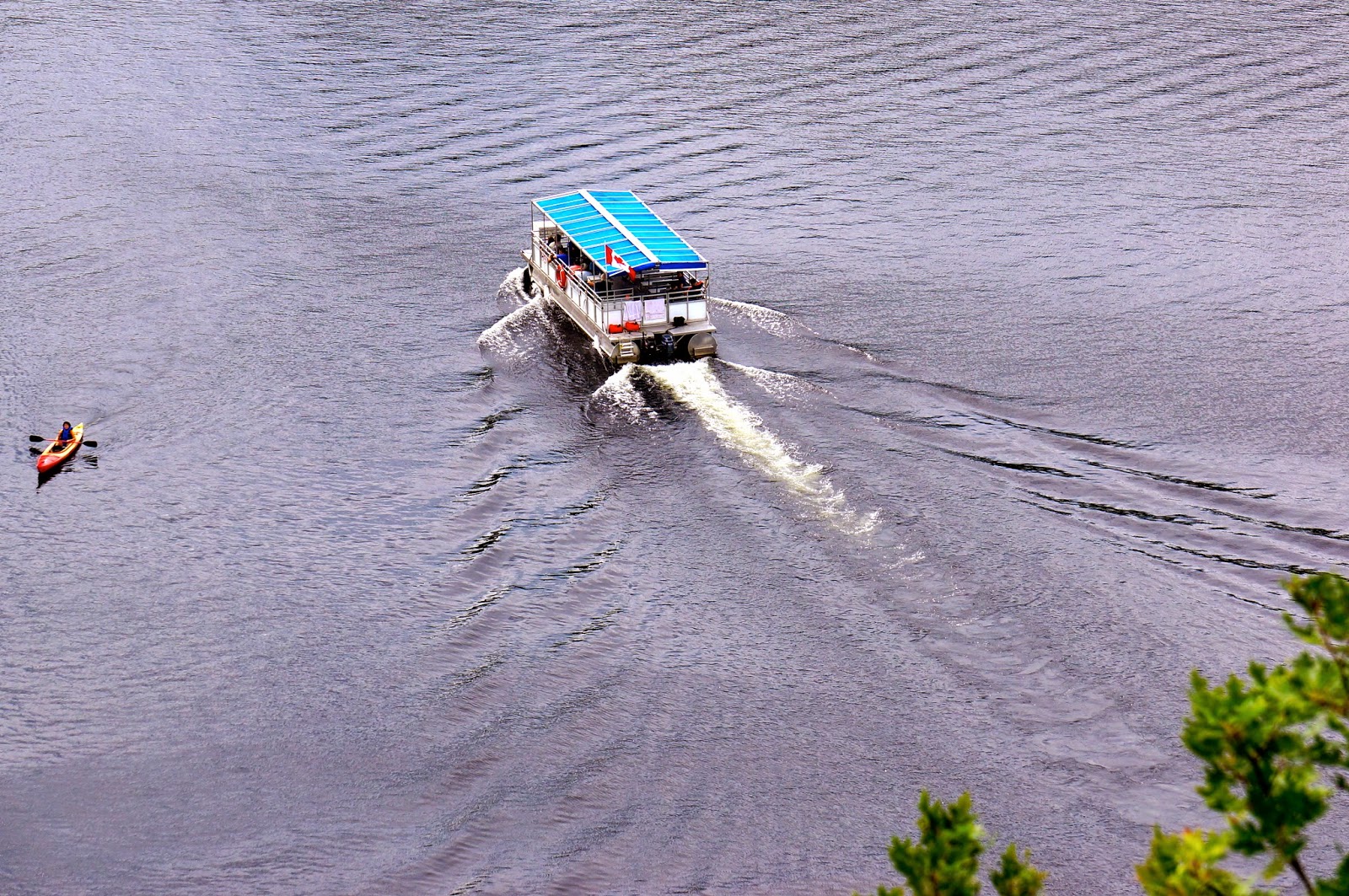 The Wanderer Tour boat that we rode on the day before 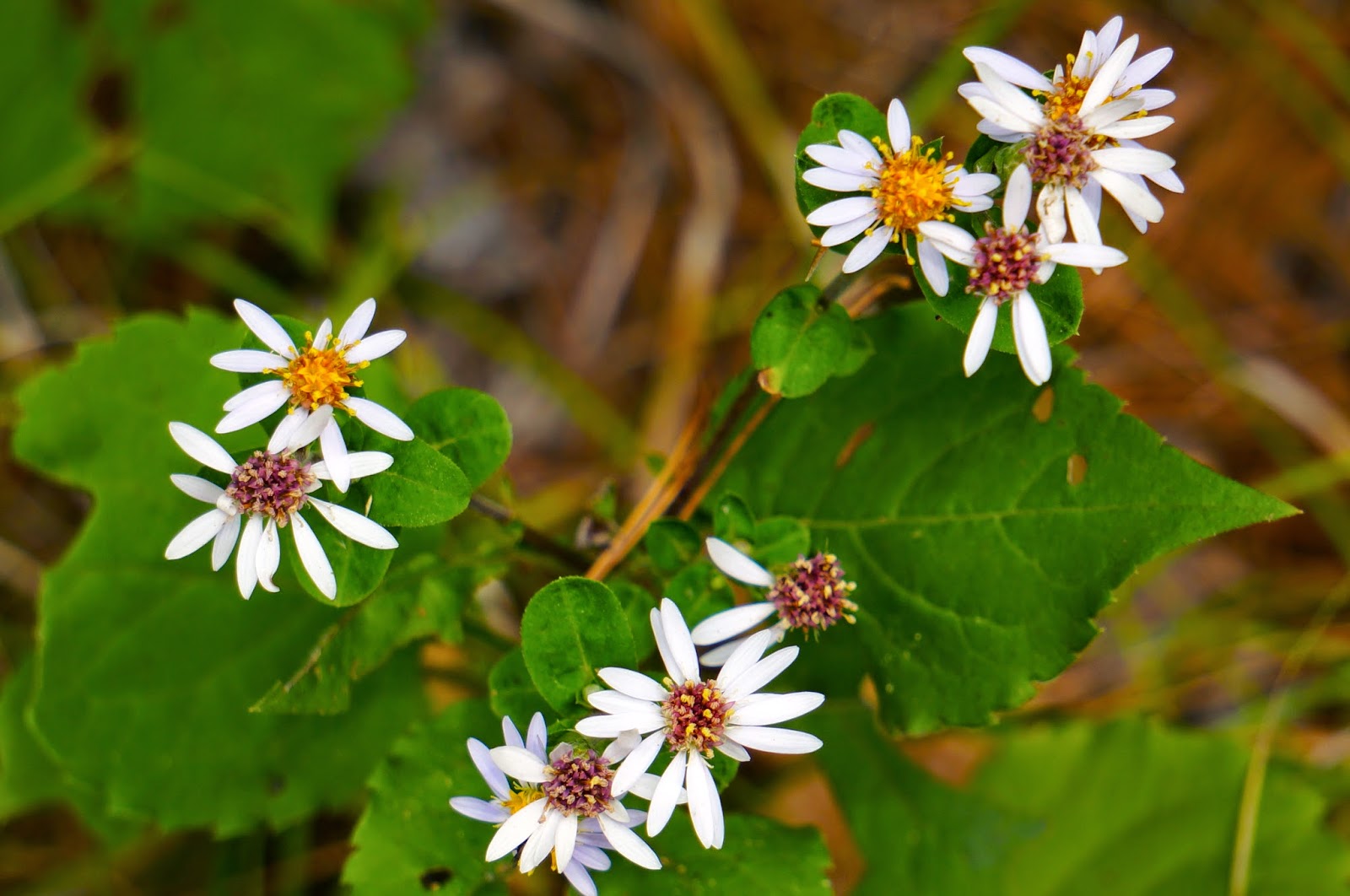 Flowers growing at the top of the cliff trail 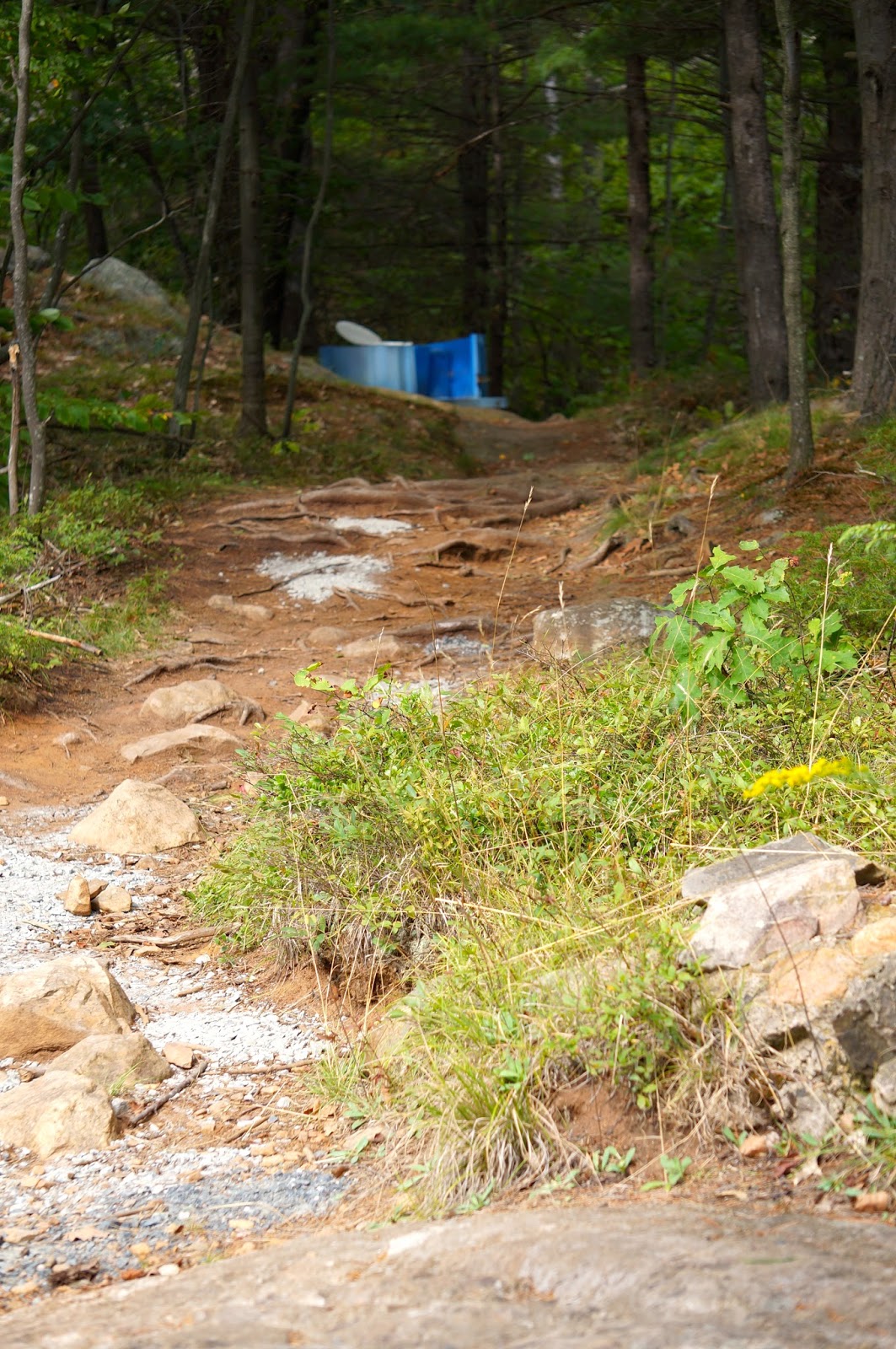 An outdoor potty along the trail 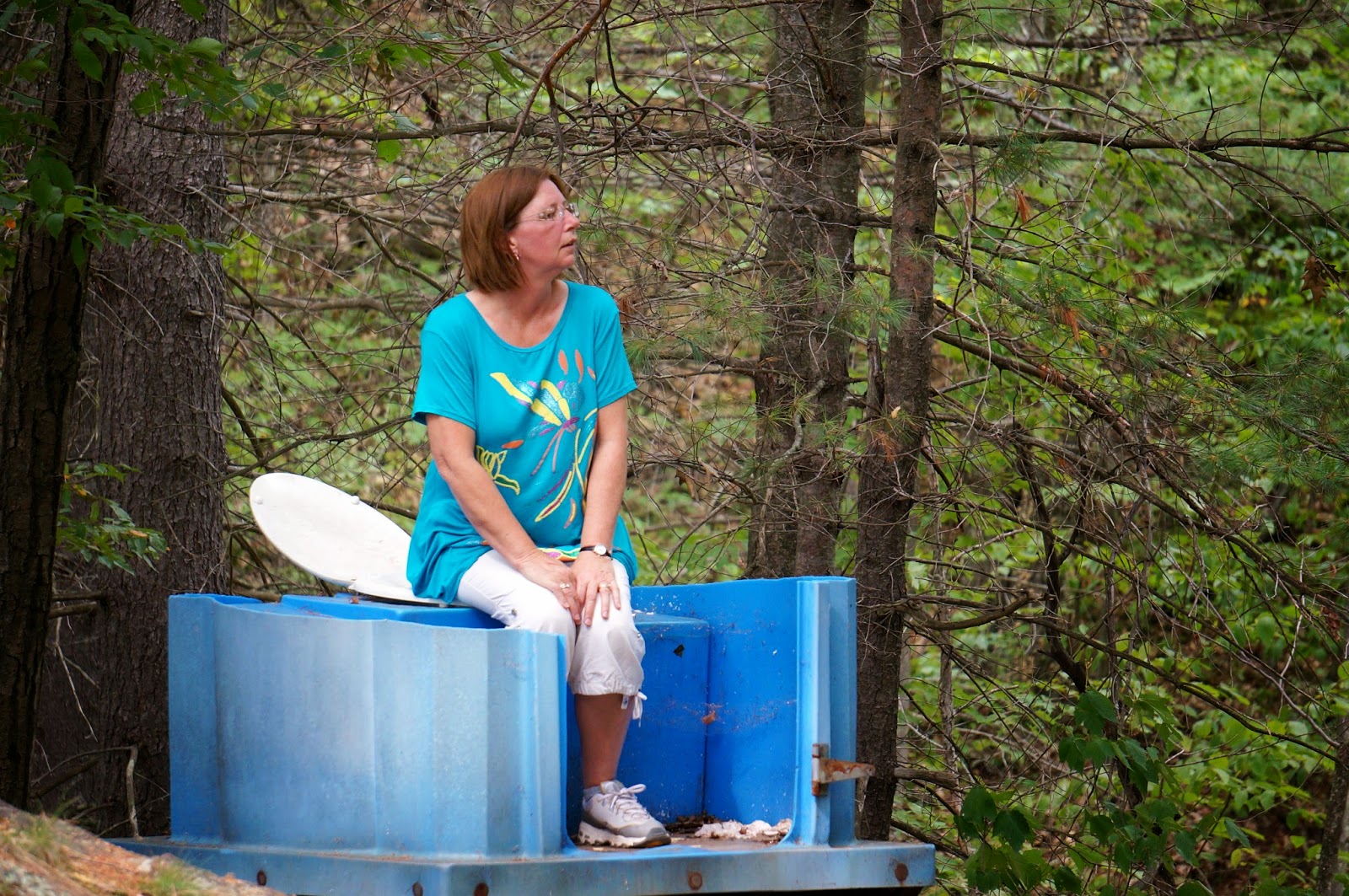 I just had to check out the view.....lol 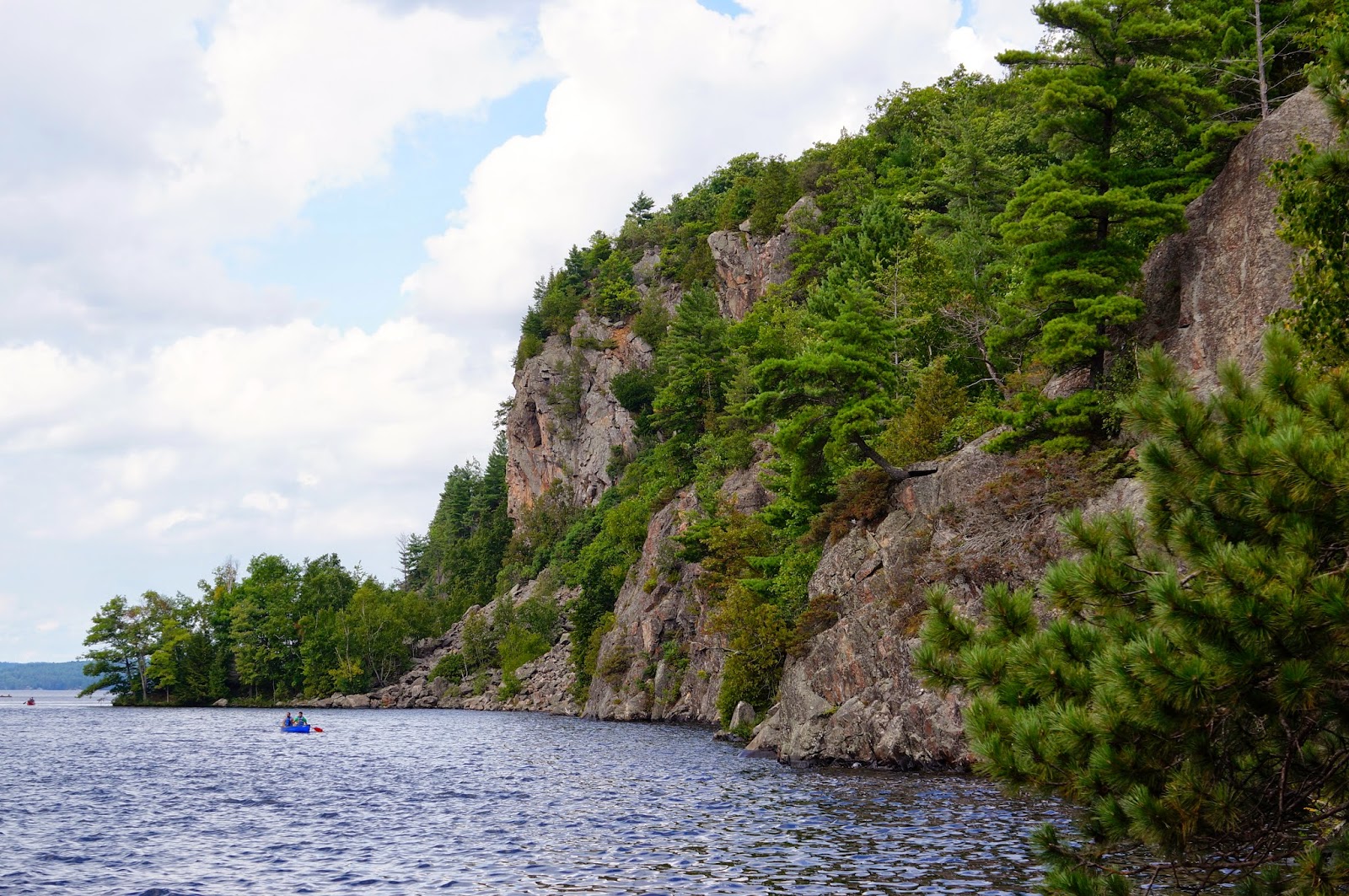 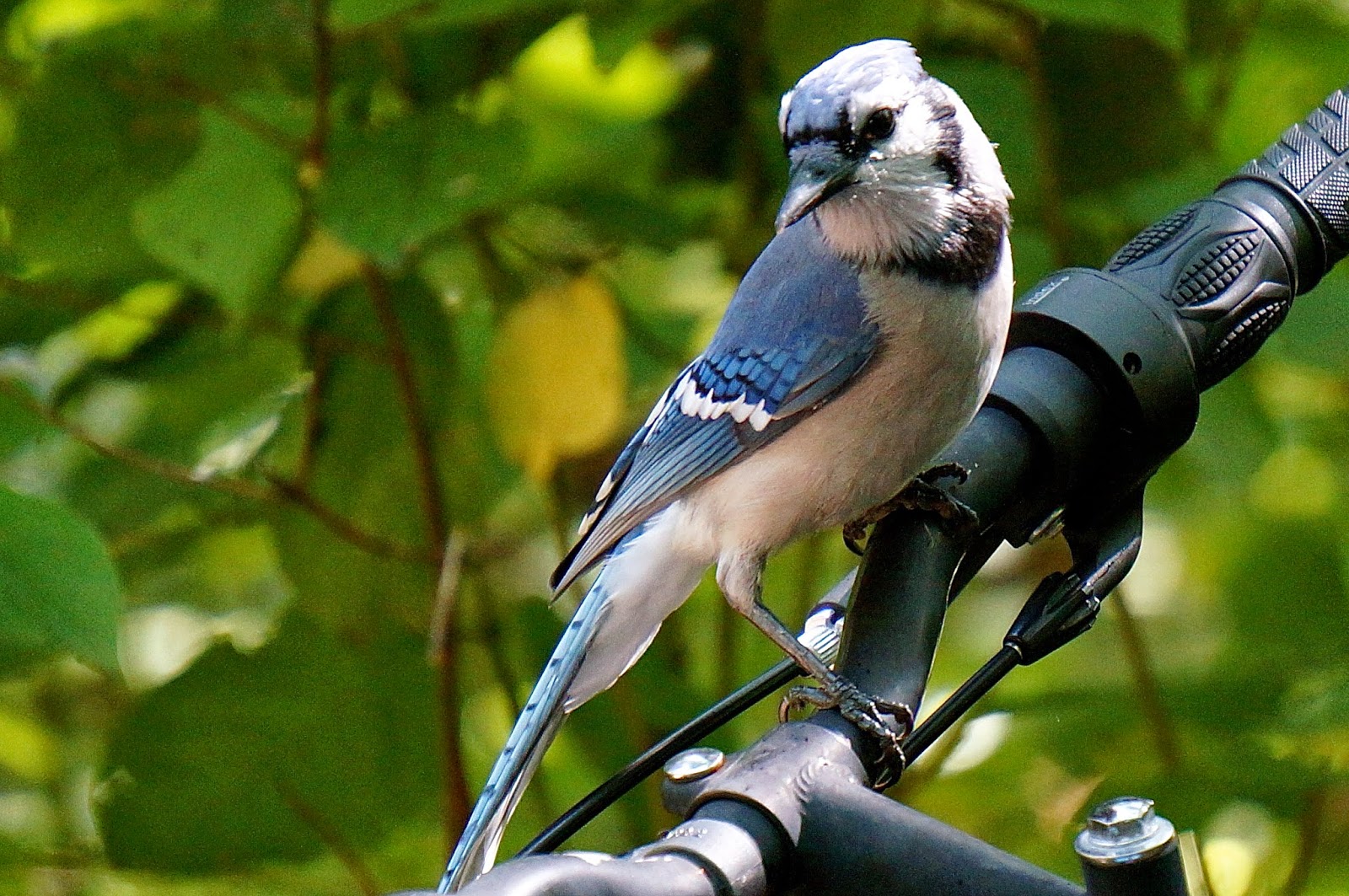 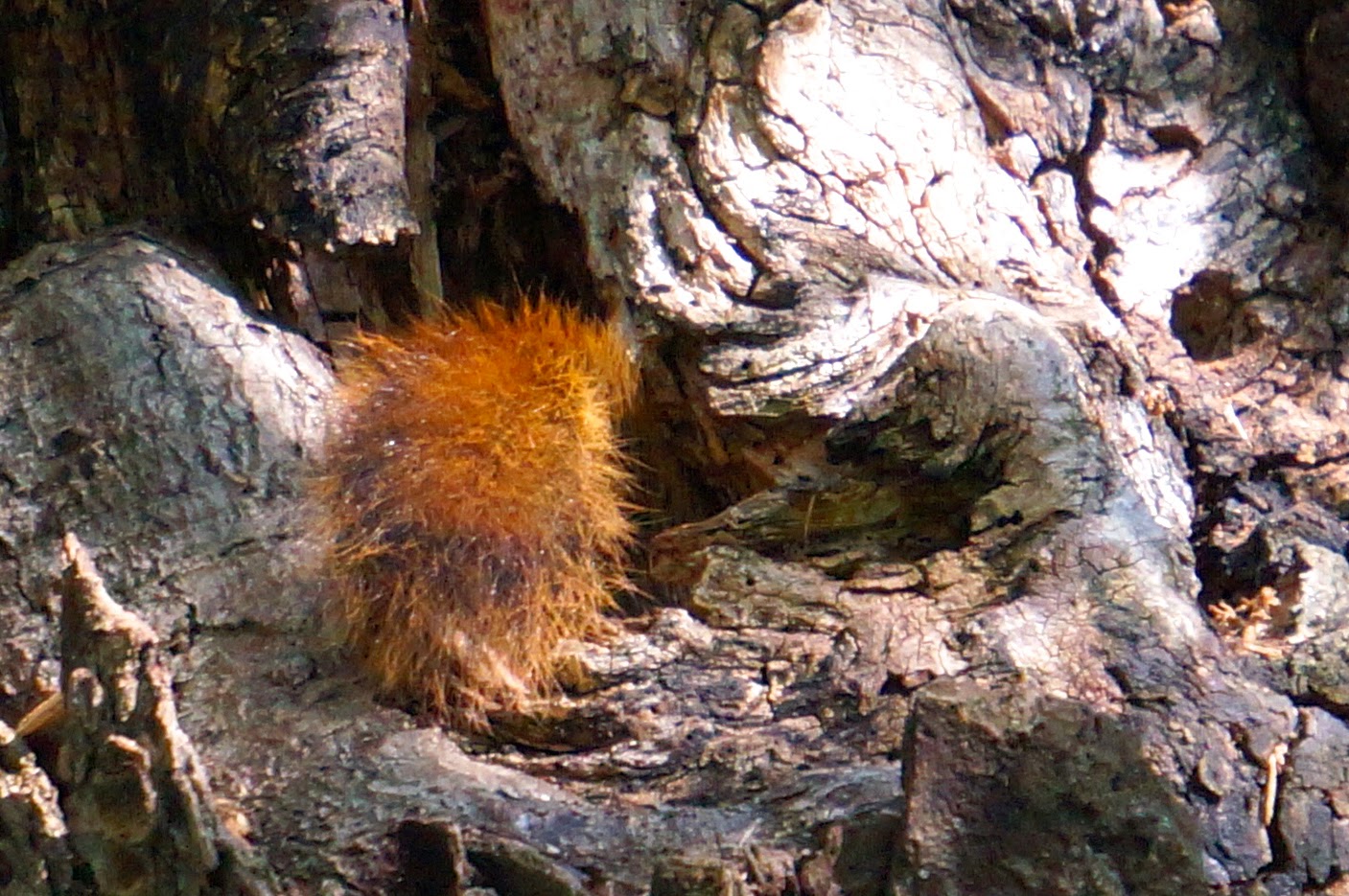 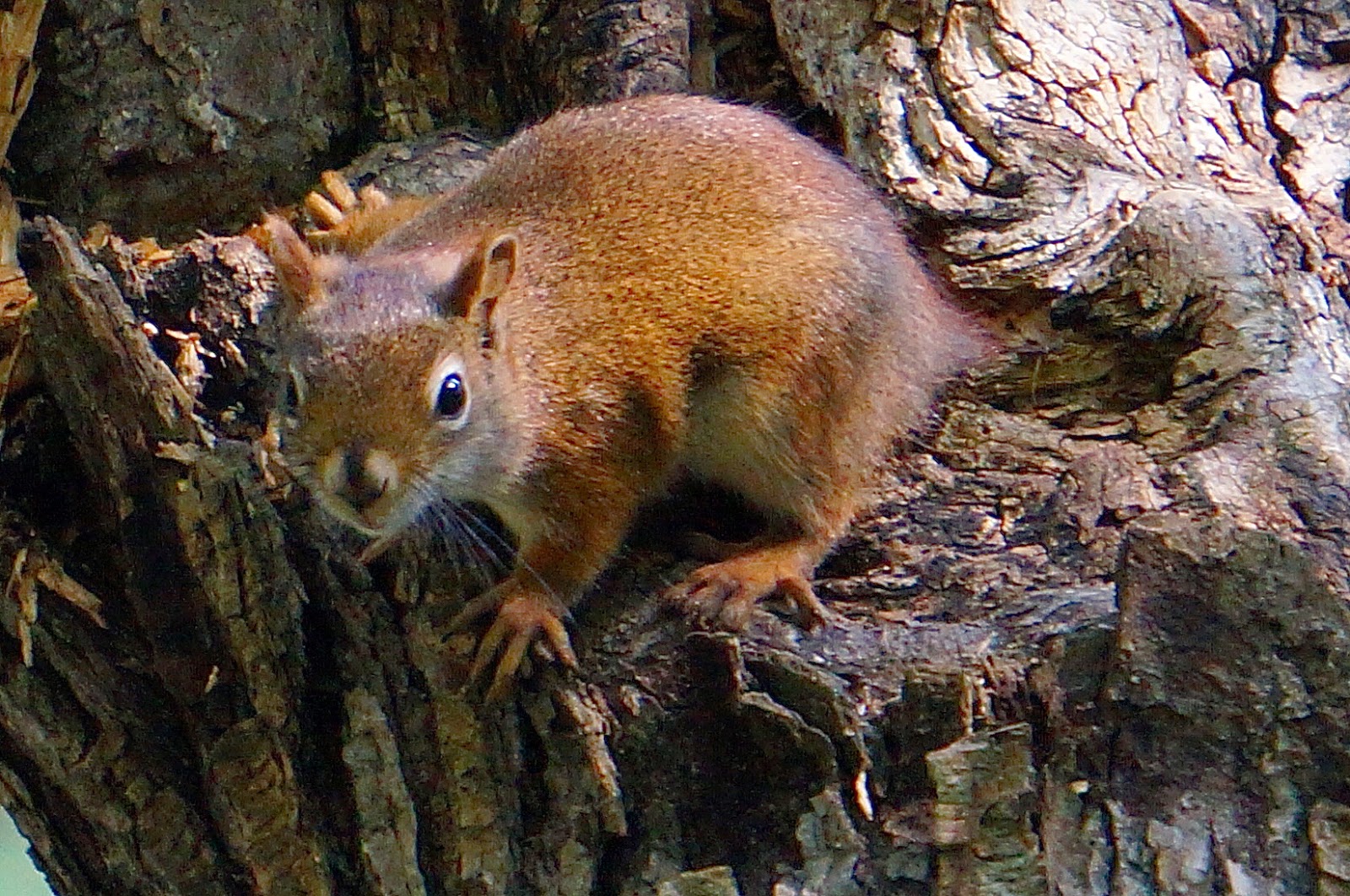 It wasn't happy that I knew where it lived...
The stare down between the two of us